The IPL Governing Council (GC) and BCCI on Tuesday in an emergency meeting unanimously decided to postpone IPL 2021. 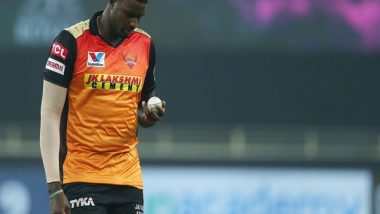 Holder also urged the Indian fans to keep fighting the COVID-19 battle as the West Indies all-rounder bid adios to the 2021 season. "Sad that the tournament had to be postponed but always great playing in the @iplt20. To the people of India I urge you to keeping fighting this battle together and I wish you all the very best. @sunrisershyd until we meet again," Holder captioned the post on Instagram. IPL 2021 Suspended: Rajasthan Royals Are Most Profited Team with the Tournament Postponed, Here’s Why.

With Saha testing positive, the game on Tuesday evening between SRH and defending champions Mumbai Indians also needed to be postponed.

This made matters worse as the game between RCB and KKR had already been postponed and the game between CSK and Rajasthan Royals was also set to be called off as the Chennai unit was in strict quarantine. This finally saw the BCCI postpone the IPL.