The world-famous neon lights of Las Vegas will provide the backdrop to Formula 1's newest race when the American city hosts a night event in 2023. 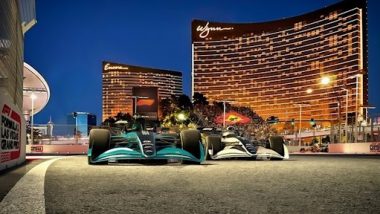 Las Vegas [US], March 31 : The world-famous neon lights of Las Vegas will provide the backdrop to Formula 1's newest race when the American city hosts a night event in 2023. The Las Vegas Grand Prix will take place on a Saturday next November and be one of three races in the United States, joining Miami and Austin.  Real Madrid Coach Carlo Ancelotti Tests Positive for COVID-19.

Las Vegas hosted races in 1981 and 1982 but this will be the first time F1 cars will race on the iconic Las Vegas Strip, with the circuit sweeping past famous hotels and casinos. The 14-turn track will run for 3.8 miles (6.12km) with top speeds expected to hit around 212mph (342km/h).

They were joined by local stakeholders including Nevada Governor, Steve Sisolak, CEO and President of the LVCVA, Steve Hill and President and CEO of Live Nation Entertainment, Michael Rapino. Domenicali said: "This is an incredible moment for Formula 1 that demonstrates the huge appeal and growth of our sport with a third race in the US. Las Vegas is a destination known around the world for its excitement, hospitality, thrills, and of course, the famous Strip." (ANI)