As someone with the [playing] experience he has, in that sort of position, the manager is really on to the players about that in training, trying to improve that," he added. 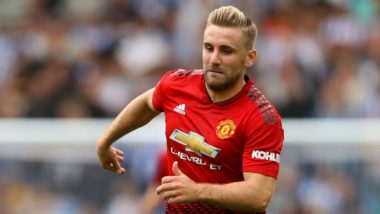 Manchester, September 14: Manchester United defender Luke Shaw said the club should focus on winning trophies this season instead of settling for a place in the top four. United finished third in the English top-flight last season and made it to the semi-finals in the Europa League, FA Cup, and Carabao Cup. Also Read | US Open 2020 Final: Dominic Thiem Defeats Alexander Zverev in Five-Set Thriller to Win First Grand Slam Title.

The Red Devils have failed to win the Premier League since 2013 and have not lifted any silverware since their Europa League and League Cup successes three years ago.

"It's a very weird feeling, especially for me. I don't feel I've had much time off. I haven't, to be honest! But this is life sometimes. You need to be ready, whatever happens, and it's one of those scenarios where we have a lot of world-class players we're looking forward to getting back [in training] on Monday," the England full-back told the club's website. Also Read | Neymar Jr Regrets Not Hitting Marseille Defender in the Face After Alleged Racism Incident (Watch Video).

United faced a 1-0 defeat against Aston Villa in a club-friendly game on Saturday. Shaw was disappointed with the result and insisted on improvement. "Obviously it's friendly but I'm disappointed we didn't win. And we lost. I'm really disappointed, to be honest," Shaw said.

"We create opportunities but struggle at times to find the back of the net. As someone with the [playing] experience he has, in that sort of position, the manager is really on to the players about that in training, trying to improve that," he added. United will take on Crystal Palace in their opening game of the season on September 19.