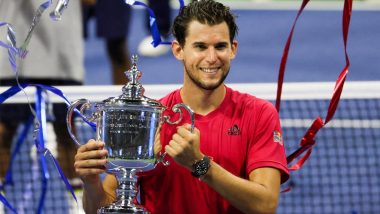 Dominic Thiem defeated Alexander Zverev in the finals of the US Open 2020 to win his maiden Grand Slam title. The Austrian rallied back after losing the opening two sets to register a historic comeback in a thrilling encounter which lasted for 4 hours 2 minutes at an empty Arthur Ashe Stadium on Sunday. The Austrian’s previous best finish at US Open was a quarter-final appearance in 2018. Naomi Osaka Says 'My Ancestors Blood Reminds That I Cannot Lose' Following US Open 2020 and Third Grand Slam Victory.

Dominic Thiem created history after defeating Alexander Zverev 2-6, 4-6, 6-4, 6-3, 7-6 (8/6) in US Open 2020 finals. This is the first time in the competition’s Open Era history that a player has recovered after losing the first two set to register a title win. It was also the maiden time that a final had to be settled by a tie break.

Thiem became the first Austrian to reach a US Open singles final looked far from getting his hands on the title after Alexander Zverev took a two-set lead. However, the 27-year-old dug deep and rallied back to win the next two sets and won the game in the most dramatic fashion by winning a fifth set tie-breaker.

The point that made him a Grand Slam champion 👇 pic.twitter.com/uYMplH3TF7

This is Dominic Thiem’s first-ever Grand Slam win after suffering defeat in his last three major finals. The Austrian also reached the finals of Australian Open earlier this year but lost to Novak Djokovic over five sets. He has also suffered defeats in the last two French Open finals but put an end to that run this time around.

‘I wish we could have two winners today. I think we both deserved it’ Thiem said after his win. Thiem is also the first Grand Slam champion other than Novak Djokovic, Rafael Nadal or Roger Federer since Switzerland's Stan Wawrinka won at the 2016 US Open.

(The above story first appeared on LatestLY on Sep 14, 2020 09:41 AM IST. For more news and updates on politics, world, sports, entertainment and lifestyle, log on to our website latestly.com).