After being humiliated 7-2 by Aston Villa and drawing with Everton, the champion came from behind to beat Sheffield United 2-1 to go second behind Merseyside rival Everton. 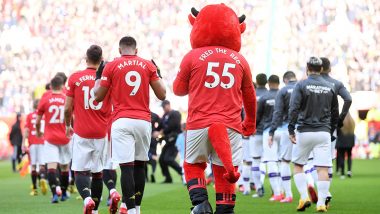 London, October 25: The Manchester rivals are rolling the clock back six years in a way neither desires. A pair of draws on Saturday left the teams with their lowest English Premier League points tallies after five games since 2014. Also Read | Khabib Nurmagomedov Defeats Justin Gaethje at UFC 254, Russian MMA Fighter Announces Retirement.

City is on eight points after being held at West Ham to 1-1. United is a point worse off after a goalless encounter with Chelsea. Also Read | Umesh Yadav Birthday Special: 5/53 vs Bangladesh in Day-Night Test & Other Spectacular Performances By Indian Pacer.

While City at least has the comfort of winning the title since it last started as badly — in 2018 and 2019 — United's heavy spending hasn't got them much closer to lifting the trophy since Alex Ferguson's retirement in 2013.

Even Liverpool has managed to end its 30-year championship drought, and the title defense is back on the winning path. After being humiliated 7-2 by Aston Villa and drawing with Everton, the champion came from behind to beat Sheffield United 2-1 to go second behind Merseyside rival Everton.

The Blades remain stuck on a single point along with Fulham, which lost to Crystal Palace 2-1.