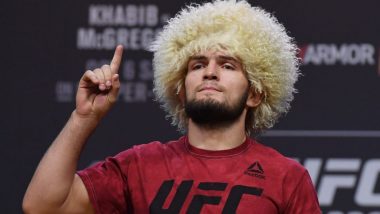 It was quite an emotional moment for Khabib Nurmagomedov as he passed one of the toughest test against Justin Gaethje at the finale of UFC 254 which was held at Abu Dhabi in UAE. Nurmagomedov took one minute 34 seconds to win the finale of UFC 254 and the Russian great did it with a broken foot. Triangle Choke was his move to seal the second round and Nurmagomedov walked away with a win. This made Justin Gaethje go unconscious and Khabib walked away with a win. This is only the third time in the history of MMA that a player has been defeated via on triangle-choke submission. Post this the Russian fighter announced his retirement and was left teary-eyed as this was his first match after his head coach Abdulmanap Nurmagomedov died in July due to COVID-19. Khabib Nurmagomedov vs Justin Gaethje Preview: Undisputed Lightweight Championship on the Line At UFC 254.

Khabib’s mother did not want him to compete after his father passed away but he promised that this would be his last match. Needless to say that his eyes were all welled-up as he delivered a retirement speech. While making his retirement speech Khabib announced that it was his last fight and remembered his father. "Today, I want to say this was my last fight. It was my father's dream. What else," Nurmagomedov said with tears in his eyes after the match. Check out the video of his speech below:

Khabib Nurmagomedov: "I promised my mother this is going to be my last fight." #UFC254 pic.twitter.com/XnkDyMFdAP

The Russian fighter also took to social media and posted a picture with his father. Check out the post above by Khabib

Conor McGregor reacted to Khabib Nurmagomedov's retirement on social media. He first congratulated Khabib for his career and then said that his father would incredibly proud of the way he fought.

(The above story first appeared on LatestLY on Oct 25, 2020 09:03 AM IST. For more news and updates on politics, world, sports, entertainment and lifestyle, log on to our website latestly.com).