Resuming from 126/5, Pakistan lost overnight batsman Babar Azam early as he was caught behind the stumps by Jos Buttler off Stuart Broad. He played a knock of 47 runs. 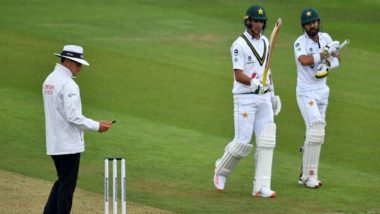 Southampton, August 14: Pakistan were at 223/9 before the bad light enforced early stumps on day two of the second Test against England at Ageas Bowl on Friday. Mohammad Rizwan along with the tailenders guided the side to a respectable total despite the fall of wickets at the other end.

The start of play on day two was delayed due to the wet outfield. Resuming from 126/5, Pakistan lost overnight batsman Babar Azam early as he was caught behind the stumps by Jos Buttler off Stuart Broad. He played a knock of 47 runs.

Yasir Shah joined Mohammad Rizwan in the middle. The duo stitched a brief stand of 13-run before the former departed. Shah (5) was also caught by Buttler off James Anderson. Shaheen Shah Afridi failed to put any run on a scoreboard and was run out by Dom Sibley. ENG vs PAK 2nd Test 2020, Day 2 Stat Highlights: Stuart Broad & Co Rattle Pakistani Batting Line-Up As Mohammad Rizwan Stands Tall With 60 Runs.

Mohammad Abbad and Rizwan guided the side to 200-run mark, The duo added 39-run for the eighth wicket partnership. Abbas (2) was caught in front of the wickets by Broad and was sent back to the pavilion.

Rizwan is unbeaten on 60* while Naseem Shah is not out at 1*. For England, Broad scalped two wickets while Anderson picked one wicket on day two.

Earlier on day one rain enforced early stumps. Pakistan won the toss and elected to bat first. The visitors are trailing the three-match series 1-0 after losing the first game at Old Trafford.