It was Wilson's first appearance since Feb. 6, with the Magpies winless during the time their top scorer has been out with a hamstring problem, but it was Saint-Maximin who would do the damage at Turf Moor. 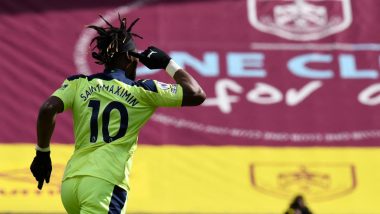 Burnley, April 11: Allan Saint-Maximin came off the bench to inspire Newcastle to a 2-1 victory at Burnley that lifted the team six points clear of the Premier League relegation zone on Sunday.

Trailing to Matej Vydra's first-half goal, Newcastle looked uninspired before Steve Bruce brought on Saint-Maximin and Callum Wilson in the 57th minute. It was Wilson's first appearance since Feb. 6, with the Magpies winless during the time their top scorer has been out with a hamstring problem, but it was Saint-Maximin who would do the damage at Turf Moor.

Within two minutes of his introduction, the Frenchman, who has been limited to 18 league appearances this season through illness and injury, ran into the penalty area, drawing three defenders before pulling the ball back for Jacob Murphy to fire in an equalizer. Inter Milan 1-0 Cagliari, Serie A 2021 Match Result: Matteo Darmian Goal Sends Inter 11-Points Clear.

Bailey Peacock-Farrell, deputizing for the injured Nick Pope in the Burnley goal, had enjoyed a relatively quiet afternoon to that point, but five minutes later he was picking the ball out of the net again as Saint-Maximin raced from the halfway line before finding the bottom corner.

It was a remarkable turnaround after Newcastle had been second best for almost a full hour, and one that could just transform their season. Victory ended a seven-game winless run for Bruce's side, and the second-half display offered a roadmap out of trouble. But Sean Dyche must rue the three points that got away as his side, which has won just one of its last eight, let a winning position slip for a second week running.