On This Day in 2014: Virender Sehwag Registered His Highest IPL Score of 122 Runs Off 58 Balls Against CSK

It was on this day, seven years ago, when former India batsman Virender Sehwag registered his highest individual score in the Indian Premier League (IPL). 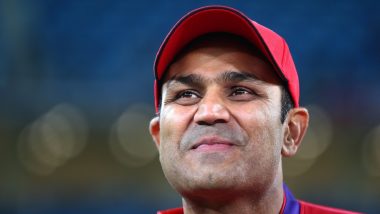 New Delhi, May 30: It was on this day, seven years ago, when former India batsman Virender Sehwag registered his highest individual score in the Indian Premier League (IPL).

Sehwag, who was representing Kings XI Punjab in the 2014 edition of the IPL, went on to play a knock of 122 runs off just 58 balls against Chennai Super Kings at the Wankhede Stadium in Mumbai. IPL 2021: BCCI to Conduct Remaining Matches of VIVO IPL in UAE Considering the Monsoon Season in India.

In the second qualifier of the playoffs stage, Sehwag was seen at his blistering best and his knock enabled Punjab to post a total of 226/6 in the allotted twenty overs.

Sehwag's innings was studded with 12 fours and eight sixes and the right-handed batsman scored his runs at a strike rate od 210.34. This was Sehwag's second century in the history of IPL as he had scored his first century in the 2011 edition against Deccan Chargers.

Chasing 226, Chennai fell 24-run short as the side was restricted to 202/7 in the allotted twenty overs. Suresh Raina played a quickfire knock of 87 runs off just 25 balls, sending alarm bells ringing in the Punjab camp, but as soon as he got dismissed, Chennai's innings got derailed.

As a result of this win, Punjab managed to reach the finals of the IPL for the very first time. However, the side lost the finals against Kolkata Knight Riders.

His last season in IPL came in the 2015 season as he played eight matches during that particular edition, managing to score just 99 runs at an average of 12.37.