Manchester City will now take on Manchester United in the Premier League on Sunday. 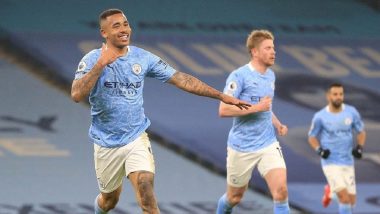 Manchester, March 3: Gabriel Jesus' brace helped Manchester City thrash Wolves 4-1 in the Premier League at the Etihad Stadium on Wednesday. With this win, City further consolidated its lead at the top and now the side has 65 points from 27 matches. Pep Guardiola's side now has a 15-point lead over the second-placed Manchester United.

This win was Manchester City's 21st consecutive victory across all competitions this season. In the first half, Wolves' Leander Dendoncker registered an own goal and this helped in City gaining an early lead in the 15th minute of the game. No more goals were registered in the first half and City went into the break with a 1-0 lead. Premier League 2020–21 Best Defenders: Trent Alexander-Arnold, Conor Coady and Other Top Defenders in England’s Top-Flight Football League This Season.

In the second half, Wolves got the equalising goal in the 61st minute as Conor Coady got among the scoring sheets, bringing the scoreline level to 1-1. Gabriel Jesus then came into his own and he got his first goal of the match in the 80th minute, giving City a 2-1 lead. Ten minutes later, Riyad Mahrez got among the act and this ended up giving City a 3-1 lead.

Jesus scored his second goal of the match three minutes later and in the end, the hosts walked away with a comfortable 4-1 victory. Manchester City will now take on Manchester United in the Premier League on Sunday.