Despite not dominating Europe in recent years, Premier League remains one of the toughest football leagues around the world and is often seen as the highest standard of football leagues. The competitiveness, strength of all teams, high intensity of matches is what makes Premier League the most-watched domestic competition in the globe. 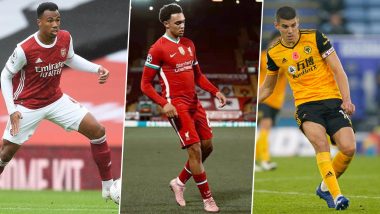 He is the current best right-back in the world at the moment. Trent Alexander-Arnold has been one of Liverpool’s most important players in their UEFA Champions League and Premier League title wins. Since breaking into the first team in 2017-18, Trent has given Liverpool a new lease in attack. He has already registered close to 30 assists in the last three seasons.

The Wolves captain is enjoying a great season both with his club and with the national team. Coady, 27, made his England debut earlier this year in the UEFA Nations League. He helped Wolves keep 13 clean sheets last season and has already kept four clean sheets this season. Coady had a poor game against Liverpool as Wolves conceded four goals. But since then, he has helped beat Chelsea.

Arsenal may be struggling as a club and find themselves close to the relegation zone after 13 rounds. But new signing Gabriel has been one of the best defenders in the Premier League this season. He has made the third-most blocks in the Premier League this season and has also made the most interceptions and won most Ariel battles among the Arsenal players.

The Newcastle United centre-back has made the most blocks and second most clearances in the Premier League this season. He has been key in all the five matches Newcastle United have won in the league and has also won the most aerial battles at the club.

He has made a poor start to the season. But Manchester United right-back Aaron Wan-Bissaka is still one of the best one-on-one defenders in the world. His ability to recover a ball and clear his lines makes him a highly-rated old school full-back. Wan-Bissaka certainly needs to work on his attacking instincts and deliver proper crosses but in defence, Bissaka is certainly among the best.

Liverpool’s Virgil van Dijk is one of the best defenders in the Premier League and also in world football. But the Dutch international could play only four league matches this season before being injured against Everton. Similarly, Leicester City’s Caglar Soyuncu has been struggling with a groin injury this season and hence not been picked.

(The above story first appeared on LatestLY on Dec 17, 2020 04:12 PM IST. For more news and updates on politics, world, sports, entertainment and lifestyle, log on to our website latestly.com).