Get latest articles and stories on Sports at LatestLY. Dusan Vlahovic on his 22nd birthday on Friday joined Juventus from Fiorentina. 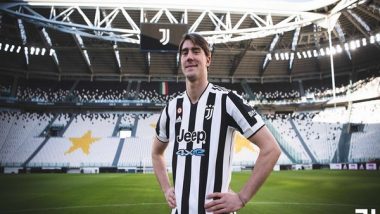 A lethal finisher, the Serbian has been in amazing form with 20 goals in 24 appearances, between Serie A and Coppa Italia, in the first part of the 2021/2022 season. Those numbers rise to 41 in 64 appearances if totalled with those from the 2020/2021 season.

Born in Belgrade on January 28, 2000, at 16 he became the youngest ever player to appear for his local club, the legendary Partizan Belgrade. He left Serbia for Italy in the summer of 2018, when he agreed to join Fiorentina.

In less time than expected, he grasped the demands of football in Italy and adapted his individual playing style to the rigours of calcio. Although officially a member of the U-19 squad, he was immediately promoted to the first team, making 10 appearances, in addition to scoring 20 goals in 22 games with the Viola U-23 side.

The following season, 2019/20, he was promoted to the first team proper. Glimpses of raw talent in his eight goals from 34 appearances between Serie A and the Italian Cup had football followers wondering just how far this player could go.

With 44 goals, Dusan is also one of only two footballers born from 2000 on, alongside Erling Haaland, to have scored at least 40 goals in Europe's top-5 leagues. (ANI)