KXIP had defeated Mumbai Indians at the end of two back-to-back Super Overs at the Dubai International Stadium on October 18 in the recently concluded Indian Premier League (IPL). 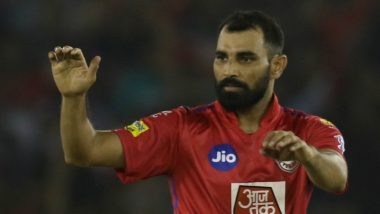 Sydney , November 21: India and Kings XI Punjab pacer Mohammad Shami had defended five runs in the Super Over against Mumbai Indians and the fast bowler has no hesitation in saying that it was a 'thoroughly satisfying' performance.

KXIP had defeated Mumbai Indians at the end of two back-to-back Super Overs at the Dubai International Stadium on October 18 in the recently concluded Indian Premier League (IPL).

Recalling his splendid bowling performance, Shami said defending five runs and that too against two of the most explosive batsmen (Rohit Sharma and Quinton de Kock) was a special feeling. IND vs AUS Series 2020: Glenn Maxwell Says ‘Poor IPL Run Won’t Affect My Performance Against India’.

"Being able to defend just 5 runs against two most explosive batsmen (Rohit Sharma and Quinton de Kock) is thoroughly satisfying. There is no margin for error when the target is so small. I don't think anybody would have given us a chance against such top-class batters," Shami told BCCI.TV as the Indian team trains in Sydney.

"I remained hopeful and backed my skills. When you are bowling yorkers there is a chance that you will end up bowling a low full toss, but I am happy I could execute my skills," he added.

Meanwhile, Shami is gearing up for the upcoming long multi-format Australia tour. While the squad remains in quarantine, the boys have been training simultaneously both with the white and red ball.

Shami feels his performance for KXIP in the IPL has given him a lot of confidence and he can now prepare for the upcoming series without any pressure.

"My performances for KXIP in IPL has given me a lot of confidence and put me in the right zone. The biggest advantage is that I can now prepare for the upcoming series without any pressure. There is no burden on me," Shami said.

"I am very comfortable at the moment. I had worked hard on my bowling and my fitness in the lockdown. I knew that IPL would take place sooner or later and I was preparing myself for it," he opines. LPL 2020: Sohail Tanvir, Canada’s Ravinderpal Singh Test Positive for COVID-19 Virus.

India and Australia are slated to square off against each other in three ODIs, three T20Is, and four Tests. The tour will commence with the three-match ODI series, slated to begin from November 27 in Sydney.