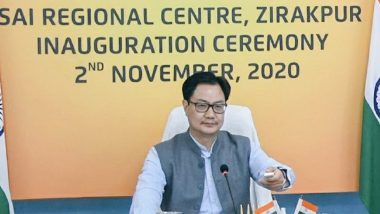 Mohali, November 2: Sports Minister Kiren Rijiju on Monday virtually inaugurated Sports Authority of India's (SAI) new Regional Centre in Zirakpur, Punjab which will now act as one of the main SAI centres for North India. During the event, the Sports Minister congratulated the coaches and athletes who would be training at the new centre. Also Read | PV Sindhu's ‘Retirement’ Tweet Made Twitterati Believe That the Indian Shuttler is Retiring from Badminton, See Reactions.

"The northern belt of India covers a huge region, right from Jammu and Kashmir and Leh to Himachal Pradesh and we are doing a lot of development in this region with the aim of building world-class sporting facilities in India," Rijiju said in a statement. Also Read | Shah Rukh Khan's 55th Birthday: KKR Captain Eoin Morgan Says 'SRK More Exciting Than Tom Cruise'.