SRH Dropping David Warner During IPL 2021 Not a Cricket Decision, He Was Just Out of Match Practice, Says Brad Haddin

Sunrisers Hyderabad assistant coach Brad Haddin feels the decision to drop David Warner during the Indian Premier League had nothing to do with matters related to cricket. 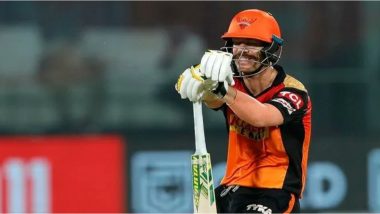 Sydney, Nov 16: Sunrisers Hyderabad assistant coach Brad Haddin feels the decision to drop David Warner during the Indian Premier League had nothing to do with matters related to cricket.

Warner, who led SRH to their only IPL title in 2016, was stripped off captaincy in May before being dropped from the playing XI for the second time this year during the second leg of the IPL.

However, the southpaw turned things around in the T20 World Cup and ended as the Player of The Tournament, playing crucial knocks in the semifinal and final.

"I tell you what it was not a cricket decision that he was not playing (for Sunrisers Hyderabad).

"I think the one thing you have to realise with David is that he was not out of form, he was out of match practice," said Haddin on the 'Grade Cricketers Podcast'.

After the IPL was suspended midway in May, Warner had opted to skip Australia's tours of Bangladesh and West Indies and entered the second leg of the league without much game time.

"They had a long break, he did not go to Bangladesh or West Indies. But he turned up in really good headspace. He was hitting the ball well, circumstances were out of our control, even the coaching staff," Haddin said.

"But it was not because he was out of form. All he needed was some match time, he was hitting the ball well. He just needed to spend some time in the middle to get the rhythm again.

The 35-year-old looked off-colour in Australia's warm-up games but eventually found his rhythm in the tournament proper. He amassed 289 runs, including a half century in the final against New Zealand.

"As the tournament went on, you have seen his class. He got a bit of rhythm back into his game and he was good to watch," Haddin added.