The Kieron Pollard-led side were 55/0 after three overs and went on to lose five wickets for just four runs in the next 2.1 overs. 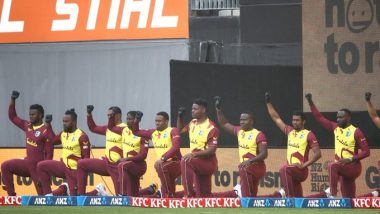 Auckland, November 27: Ahead of the first T20I against New Zealand, West Indies players took a knee to show their support to the 'Black Lives Matter' movement here at Eden Park on Friday. West Indies Cricket posted pictures of the players taking a knee to continue their fight against inequality and racism.

"The fight against Inequality & Racism continues.#MenInMaroon #TeamWI," Windies Cricket tweeted. The 'Black Lives Matter' movement had gained momentum after the death of an African-American man named George Floyd in May this year after police officer Derek Chauvin pressed his knee on Floyd's neck as suggested by viral videos. India vs Australia 1st ODI 2020 Live Score Updates.

Ever since Floyd's demise, many sportspersons have come out to talk about their experience with racism. Meanwhile, West Indies suffered a middle-order collapse after getting off to a good start against New Zealand. The Kieron Pollard-led side were 55/0 after three overs and went on to lose five wickets for just four runs in the next 2.1 overs.