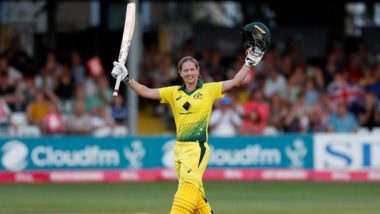 Dubai, April 13: Australia captain Meg Lanning has advanced one place to reach the fifth position among batters in the ICC Women's ODI Player Rankings after a useful knock in the second game of the three-match series in New Zealand which the visiting side won 3-0 to stretch their world-record winning streak to 24 matches.

Tammy Beaumont of England is at the top while Alyssa Healy is the top-ranked Australia player in third place, now with a career-best 756 rating points, after the latest weekly update to the women's player rankings, carried out on every Tuesday.

For New Zealand, off-spinner Leigh Kasperek has progressed seven places to 17th position, only two places shy of her career-best ranking, after returning figures of six for 46 and three for 24 in the two matches.

Amelia Kerr has advanced two places to reach 38th position among batters, thanks to a knock of 47 in the second match, while also moving from 11th to 10th among all-rounders. Brooke Halliday, who bats left-handed, has moved up 14 places to 45th after scores of 32 and 15 while Maddy Green (up from 51st to 49th) and Hayley Jensen (up from 72nd to 66th) are the others to advance.

Australia has gained two points to consolidate their position at the top of the ICC Women's ODI Team Rankings and the 3-0 series result is significant since the ICC Women's Cricket World Cup is being held in New Zealand next year. New Zealand remains fifth on the table.