Real Madrid is currently at the third position in La Liga standings with 40 points from 20 games. The side will next take on Huesca in La Liga later today. 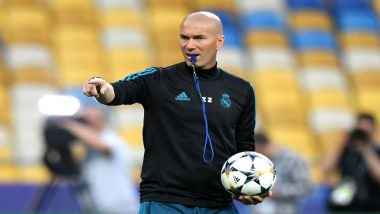 Madrid, February 6: Real Madrid coach Zinedine Zidane has said that he is hopeful of seeing Eden Hazard making a comeback for the side in the coming two-three weeks. Hazard had picked up a muscle injury earlier this week and this has added to the problems of Real Madrid. The 30-year-old has already had two spells of injury ever since coming to Madrid. The midfielder also missed some game time due to Covid-19.

"It's not an easy time for the footballer. I'm sure it's a matter of time before we see him back playing and hopefully he won't pick up another injury. Hopefully, when he recovers, we see the best Hazard, maybe in two or three weeks when he recovers," Goal.com quoted Zidane as saying. Real Madrid Coach Zinedine Zidane Will Not Resign, Determined to Turn Around Results After Successive Defeats (Watch Video).

"I think it's a bit of bad luck. It's not been easy on the player. We have to maintain a positive attitude. He's a great player, we need him back 100 per cent. Do you think he's happy with what's going on? Well, no. He's doing what he can to be in good shape, but you know in the life of a player you can be injured," he added.

If Hazard indeed misses two weeks of action, then he would be seen in action in Madrid's upcoming La Liga matches against Huesca, Getafe, Valencia and Valladolid.

Hazard also remains in doubt for Madrid's Champions League last-16 match with Atalanta in two and a half weeks time. Real Madrid is currently at the third position in La Liga standings with 40 points from 20 games. The side will next take on Huesca in La Liga later today.