Actor Taapsee Pannu, who is usually vocal about women-related issues, has shared her opinion on marital rape and abuse after watching the recent Hotstar special show 'Criminal Justice: Behind Closed Doors.' 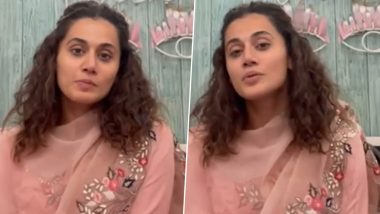 Actor Taapsee Pannu, who is usually vocal about women-related issues, has shared her opinion on marital rape and abuse after watching the recent Hotstar special show Criminal Justice: Behind Closed Doors. She took to Instagram and put out a video in which she spoke about the courtroom drama, and also shared views on the importance of consent. "Criminal Justice: Behind Closed Doors portrays the grim reality faced by a lot of women in our country. It has addressed a topic shunned for far too long, that of marital rape," the 'Thappad' actor said. Rashmi Rocket: Taapsee Pannu Wraps Up Ranchi Schedule of Her Upcoming Sports-Drama

"The show addresses the issue quite sensitively and intelligently and has come at a time when we have seen an alarming rise in the domestic abuse cases faced by women in lockdown," she added. The actor, whose superhit film 'Pink' gave the country the strong phrase of "No means No," went on to reiterate the same about marital rape. "I firmly believe that No means No; whether you are married or not - consent is paramount. I hope that this show builds confidence in women so they can speak against such acts of crime, and not keep quiet because of societal pressures," she said. Rashmi Rocket Star Taapsee Pannu Talks About Getting Varicose Veins Operated and Removed Before Starting the Training for Upcoming Sports-Drama

Pannu went on to laud the show and its cast in the caption of the video.