Get latest articles and stories on Tech at LatestLY. The audio social networking app Clubhouse is launching a new Music Mode that could make it a better place to play and listen to live music. 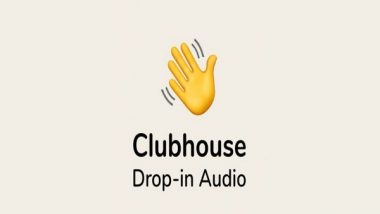 Washington [US], October 15 (ANI): The audio social networking app Clubhouse is launching a new Music Mode that could make it a better place to play and listen to live music.

As per The Verge, the new Music Mode "optimises Clubhouse to broadcast your music with high quality and great stereo sound".

Also Read | Lionel Messi Criticises Referee After Argentina's Win Over Peru, Says, 'He Does It on Purpose'.

Clubhouse doesn't say what it means by high quality, but it does also mention that you can now hook up professional equipment, like a USB mic or mixing board, and use it during your broadcast.

Clubhouse already added spatial audio in late August, which makes conversations sound more like a room full of people than a flat audio call. You can easily turn on Music Mode by tapping the three dots in the top right corner of a room, selecting Audio Quality, and then choosing Music. If you just want to listen to the performance, however, you won't have to do any of this -- just sit back and enjoy stereo audio from your headphones, speakers, or your phone itself.

Clubhouse also noted that its recently introduced Clips feature -- which lets you capture a 30-second recording -- will support stereo sound as well, so if you decide to save a snippet of performance in Music Mode, the audio quality will stay the same.

Music Mode will initially only be available on iOS, but Clubhouse says that the rollout to Android will follow shortly behind.

Aside from Music Mode, Clubhouse has also updated its search feature. The platform will now display the search bar in a more convenient location at the top of your hallway. And as an added plus, you'll also be able to Wave to friends right from the search bar, a feature that lets you quickly invite friends to a live audio room.

Amazon is far from Clubhouse's only competition for live audio. Clubhouse likely learned its lesson this past year, when Twitter, Facebook, LinkedIn, and even Spotify made their own versions of audio-only chatrooms.

All of this came at a time when Clubhouse was still in an invite-only state, making it harder for the app to grow. But now that the app is thriving, Clubhouse wants to keep as many advantages as possible. (ANI)