WWDC 2021 FAQs: How to Watch Apple Keynote Event Live Streaming, What to Expect and What Time The Event Will Start 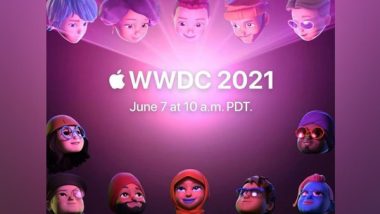 This year's event is being held online from June 7-11 and will kick off with a keynote speech at 10:30 pm IST. Here's what you need to know about the upcoming event:

Where Can You Watch Apple WWDC 2021 Livestream?

The company is streaming the event live on its website and on YouTube. Apple users can watch the keynote on their iPhone, iPad, Mac, and Apple TV as well. On the iPhone, iPad and Mac, users can watch the keynote on the Safari browser for the best experience. Just head to https://www.apple.com/apple-events/. Apple WWDC 2021 LIVE News Updates: iOS 15, iPadOS 15, macOS 12, watchOS 8 & tvOS 15 Expected To Be Launched.

What Time Does WWDC 2021 Keynote Start?

1. iOS 15 may bring improvements to notifications and iMessage:

Apple's next version of its mobile operating system, which will presumably be called iOS 15, could get big changes to notifications and possibly iMessage.

Apple also plans to add a feature that shows you apps that are silently collecting data about you, continuing the company's trend of adding privacy-focused updates to its operating systems.

For iPadOS 15, you can apparently expect a major update to the home screen, including the ability to put widgets anywhere you want. And with Apple just introducing the new M1-powered iPad Pros, here's hoping we see some new upgrades to take advantage of the new chip.

In May, Apple also announced a lot of new accessibility features coming to Apple's operating systems, such as improvements in iOS to VoiceOver, support for bidirectional hearing aids, a built-in background sounds player, and new Memoji customizations like cochlear implants. Apple said these features would arrive "later this year," which suggests they'll be included in iOS 15.

We haven't heard all that much about upcoming software updates for the Mac, Apple Watch, and Apple TV, so we'll just have to wait and see what Apple is cooking up. One tidbit: macOS could be a "more minor" update. That wouldn't be too much of a surprise, given that the macOS operating system got a big overhaul with Big Sur last year. Apple WWDC 2021: iOS 15, iPadOS 15, New MacBook Pro, macOS 12, tvOS 15 & watchOS 8 Launch Expected Today; Watch LIVE Streaming Here.

However, we could see the introduction of a brand-new operating system called "homeOS," which was recently mentioned in and later removed from an Apple job listing. While it's unclear exactly which devices this OS is for, perhaps it will work on Apple's home-focused products like the Apple TV and HomePod Mini.