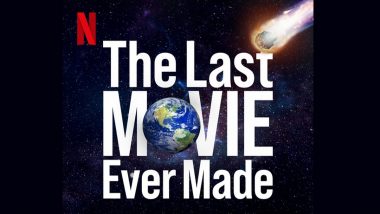 The Last Movie Ever Made Poster (Photo Credits: Twitter)

Popular streaming giant Netflix has announced 'The Last Movie Ever Made', an upcoming podcast series that will offer a behind-the-scenes look at writer-director Adam McKay's film 'Don't Look Up'. As per Variety, the podcast series will be composed of six episodes and will debut its first installment on January 7, 2022. Don’t Look Up Movie Review: Leonardo DiCaprio and Jennifer Lawrence’s Netflix Film is a Fun Satire With Some Weird Aspects to It (LatestLY Exclusive).

"In early 2020, Adam McKay set out to make a comedy," reads the podcast's logline. "It was meant to make fun of, and point to, the forces stopping us from saving ourselves from climate change. 2020, of course, had other plans. This is what happened when a cast and crew came together to make a disaster comedy, while living through a series of very uncomedic disasters," the podcast's logline further read. After a limited theatrical release that began on December 10, 'Don't Look Up' became available to stream on Netflix on December 24. The podcast series inspired by the movie will release on Spotify.