"I recently had dinner at a friend's house where the number of guests eventually exceeded five. I understand that remaining at the dinner was a breach of the rule of six. I apologise for my mistake," the north London MP told the newspaper. 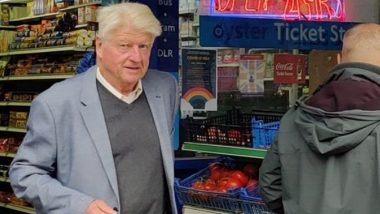 London, October 1: British Prime Minister Boris Johnson's father, Stanley Johnson, has been pictured shopping without a face mask, now a legal requirement as part of measures to control the spread of coronavirus in the UK.

The 80-year-old author and former Conservative Party member of the European Parliament apologised, claiming he may not be fully updated on the new rules, under which the lack of face coverings in enclosed spaces can incur fines of 200 pounds for first-time offenders, rising steeply for repeat offences. Also Read | Clare Bronfman, Seagram’s Liquor Heiress, Sentenced to 6 Years For Involvement in Sex Trafficking.

"I'm extremely sorry for the slip up and I would urge absolutely everybody to do everything they can to make sure they do follow the rules about masks and social distancing," Stanley Johnson was quoted as saying by the 'Daily Mirror' newspaper, which first published the picture of him shopping in a local newsagent store.

"The fact this was my first day back in the UK after three weeks abroad is, I am sure, no excuse for not knowing the rules," he said. Also Read | Brexit Deal: European Union Starts Legal Action Against UK Over Internal Market Bill.

Stanley Johnson was referring to his stay at his home in Greece, a journey which had also attracted some criticism back in July when the official lockdown-related travel guidance called for a ban on all but essential travel.

However, he had claimed his travel requirement was essential. His shopping trip back in west London without a face covering came on Tuesday, a day before his son, the Prime Minister, addressed a sombre briefing from Downing Street to warn that the UK was at a "critical point" as the number of daily coronavirus infections was showing a sharp rise.

"Bear in mind that the fines are now very considerable and they will be imposed," he had said, in reference to the legal requirement for face coverings which came in force last month. Meanwhile, former Labour Party Leader Jeremy Corbyn has also been similarly caught breaking the coronavirus rules on large gatherings and forced to apologise for the mistake.

He was pictured by ‘The Sun' newspaper with his wife, Laura Alvarez, at a dinner party for nine people, breaching the so-called "rule of six", which restricts gatherings to only six people indoors or outdoors. The first-time penalty for the breach is also set at 200 pounds.

"I recently had dinner at a friend's house where the number of guests eventually exceeded five. I understand that remaining at the dinner was a breach of the rule of six. I apologise for my mistake," the north London MP told the newspaper. It remains to be seen if Johnson and Corbyn will be issued with penalty notices and made to pay the fine.