Get latest articles and stories on World at LatestLY. Chinese mainland on Monday reported 69 locally transmitted confirmed cases of COVID-19, 52 of which were in Anhui Province, the National Health Commission report said on Tuesday. 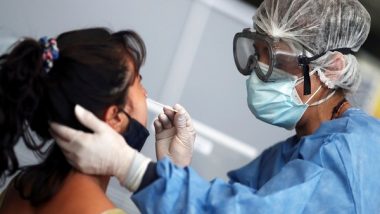 All the new confirmed cases were reported in Sixian County, Suzhou City.

As of Monday, a total of 34 COVID-19 patients were discharged from hospitals after recovery, Xinhua reported citing National Health Commission.

The total number of COVID-19 patients discharged from hospitals after recovery reached 220,199.

Meanwhile, the coronavirus outbreak has raised new worries about the outlook for the world's second-largest economy.

Despite the claims, China is witnessing a new surge in cases. On Sunday, China reported 41 locally-transmitted confirmed COVID-19 cases, including 29 of them in Anhui province.

According to the National Health Commission data, a total of 50 COVID-19 patients were discharged from hospitals after recovery on Sunday, Xinhua reported.

From June 26 to July 4, a total of 186 confirmed COVID-19 cases, including one from overseas, and 895 asymptomatic carriers had been logged in the latest epidemic resurgence in Anhui.

Two new cases of COVID-19 were recently found in Wuhan, where the virus first emerged, though Chinese President Xi Jinping emphasized the zero-COVID policy during his visit to the city last week.

COVID-19 returned to the central Chinese city where it first emerged just days after Xi visited the sprawling city, the Daily Mail reported.

Due to the latest outbreak in Beijing, millions of people are facing mandatory testing and thousands are under targeted lockdowns, just days after the city started to lift widespread curbs that had run for more than a month to tackle a broader outbreak since late April. China has incurred severe effects on the livelihoods of its inhabitants in the first half of 2022 as a result of rigorous lockdowns and demanding testing procedures in different parts of the nation.

The economic impact of the zero-COVID strategy has also dented income. Fiscal revenue fell 4.8 per cent on the year for the four months through April, according to the Finance Ministry, owing mainly to tax refunds aimed at supporting businesses. (ANI)