Get latest articles and stories on World at LatestLY. Chinese Vice Foreign Minister Ma Zhaoxu on Saturday said that no one can claim perfection for human rights protection and China will follow that path on the issue which suits its national "conditions". 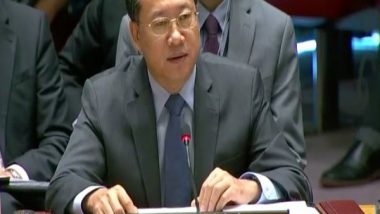 Beijing [China], May 29 (ANI): Chinese Vice Foreign Minister Ma Zhaoxu on Saturday said that no one can claim perfection for human rights protection and China will follow that path on the issue which suits its national "conditions".

This remark comes following the visit of UN rights chief Michelle Bachelet to China which faced flak from the World Uyghur Congress. The human rights group said that Bachelet has wasted a historic opportunity to investigate the Uyghur genocide and deliver justice to the Uyghur people.

Briefing the media on Saturday after the conclusion of Bachelet's visit to China, The Global Times quoted Ma as saying, "As for human rights protection, no one can claim perfection. China will follow the human rights development path that suits its natl conditions, and advocates shared values of humanity, including peace, development, equity, justice, democracy and freedom."

Meanwhile, the United States on Sunday also expressed concern over Beijing's efforts to restrict and manipulate the visit of Bachelet and her team to China that "did not enable a complete and independent assessment of the human rights environment" in the country, including in Xinjiang, where "genocide and crimes against humanity are ongoing".

World Uyghur Congress said that Bachelet also did not visit Tibet and referred only marginally to the situation in the region, which is regularly ranked as one of the least-free in the world.

Human rights groups say this visit has turned out to be a "propaganda opportunity" for China to whitewash its crimes against humanity and genocide against the Uyghur people.

Despite the worldwide condemnation of the human rights issues in Xinjiang, Ma in the country's defence during the press briefing said that "for a period of time, certain Western countries and anti-China elements, under the disguise of human rights, have fabricated many sensational palpable lies on the so-called Xinjiang-related issues, only to fulfil their political motive of using Xinjiang to contain China".

United Nations High Commissioner for Human Rights Michelle Bachelet visited China from May 23 to 28. Notably, this was Bachelet's first visit to China since she took office as well as the first such visit by a UN human rights chief in 17 years. President Xi Jinping also met via video link with High Commissioner Bachelet on May 25.

She also had field trips in Kashgar and Urumqi where she had conversations with people from various communities, including ethnic minorities, academics, and representatives of different social sectors. (ANI)