A heavy underwater fire has erupted near an oil platform of the Mexican Pemex company in the Gulf of Mexico, media reported. 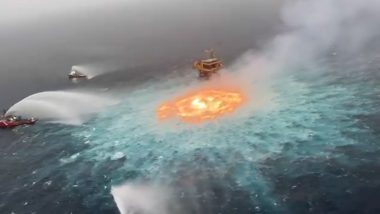 Washington, July 3: A heavy underwater fire has erupted near an oil platform of the Mexican Pemex company in the Gulf of Mexico, media reported.

The blaze started at about 4:00 local time (09:00 GMT), 400 meters (over 1,300 feet) of the Ku-Charly oil platform, not far from the shore of the Mexican state of Campeche, the Televisa broadcaster reported on Friday.

The fire was caused by a gas leak from a pipeline at a depth of 78 meters. No employees of the oil platform were injured, there was also no evacuation from the facility.

Later, Pemex said that by 10:45 local time, the fire had been extinguished as a result of a five-hour operation that involved three firefighting vessels.

The company also noted that the blaze had erupted at 5:15, not 4:00, as it was previously reported. Pemex added that it had launched an investigation into the incident.