In a letter circulated last month, the Ministry of Interior warned that more than year-long peace negotiations between the TTP and the government of Pakistan “had come to a standstill”, which has led to unease within the TTP's ranks, the Dawn newspaper reported. 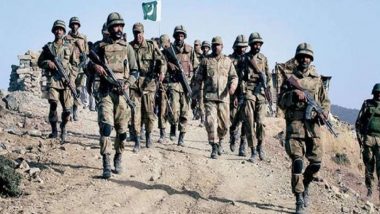 Islamabad, October 6: The Pakistan government has issued a nationwide alert to authorities to maintain "extreme vigilance" amid a heightened risk of terrorist attacks by the Tehreek-i-Taliban Pakistan (TTP) after peace talks with the dreaded terror group have stalled, a media report said on Thursday.

The federal government said it had learnt that the TTP high command met recently in Paktika, Afghanistan, to discuss the deadlock in peace talks and the fate of the negotiations with the Pakistani government after the killing of TTP commanders Omar Khalid Khorasani and Aftab Parkay.

The letter urged all authorities in four provinces to heighten security and exercise enhanced vigilance to avoid any untoward incident, the Ministry of Interior said in a statement, instructing forces that targeted search and strike missions be carried out wherever militant activity is reported. Pakistan Government Calls Imran Khan ‘Traitor’, Warns Him Against Attacking Islamabad.

In a letter circulated last month, the Ministry of Interior warned that more than year-long peace negotiations between the TTP and the government of Pakistan “had come to a standstill”, which has led to unease within the TTP's ranks, the Dawn newspaper reported.

It noted that the TTP accuses the Pakistani government of failing to fulfil its main demand — the reversal of the merger of former Federally Administered Tribal Area (FATA) with Khyber Pakhtunkhwa — as well as continuing to detain TTP members while a truce was still being negotiated. The letter was addressed to the home and chief secretaries of the four provinces as well as the Islamabad chief commissioner, the report said.

The ministry warned that the terror group or its splinter factions might also seek to escalate terrorist activities in the coming days to avenge the killing of their commanders and to show strength in case there is no further progress in peace negotiations. The notice said the TTP top brass, fearing a complete breakdown of the talks, decided to move their families to secure places as they feared Pakistani security forces would launch a kinetic operation in case of failure of talks.

Some of the militants' families may be moved to Karachi and its adjoining areas, the notice warned. The interior ministry also took grave notice of reports that TTP mil­itants are attempting to mig­rate to North and South Waziris­tan from Afghanistan to set up camp for future attacks. It desc­r­ibed reports of the arrival of TTP militants in areas neighbouring the Pak-Afghan border as well as deeper within Khyber Pakhtun­khwa as “a worrisome phenomenon”.

It said that known militant commanders based in Waziristan — Abu Yaha, Molvi Munawar and Matoob Ali Jan alias Sailab — have been in contact with the TTP high command in Afghanistan for further directions regarding moving to the area to intensify terrorist activities. The government also highlighted the risk of TTP sub-groups defecting to the militant Islamic State (ISKP) or joining hands with the Hafiz Gul Bahadur group to resume terrorist activities.

The interior ministry said targeted strike operations might be launched in areas where militants' presence is reported and that law enforcement officials should ensure heightened security measures in their respective jurisdictions to avoid any untoward incident, according to the Dawn report. Indian-Origin Family Kidnapped in US: Bodies of Four Members of Sikh Family Found in California, Abduction Video Surfaces.

Pakistan last year launched talks with TTP with the facilitation of an interim Afghan government but no headway has been made. In 2012, Nobel laureate Malala Yousafzai was attacked by TTP. She suffered bullet injuries and was admitted to the Military Hospital (CMH) Peshawar and then taken to London for further treatment. The TTP claimed responsibility for the attack, saying that Yousafzai was a "Western-minded girl".

In 2014, Pakistani Taliban stormed the Army Public School (APS) in the northwestern city of Peshawar, killing at least 150 people, including 131 students. The attack sent shockwaves across the world, and was widely condemned.