Get latest articles and stories on World at LatestLY. Pakistan Army has lodged an FIR against Imaan Mazari, daughter of Pakistan's former human rights minister Shireen Mazari, for "abusing and defaming" the army and Chief of Army Staff General Qamar Javed Bajwa. 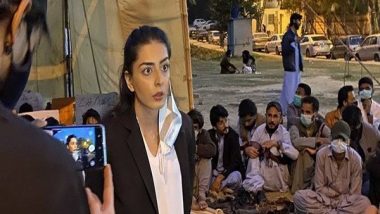 However, the Islamabad High Court admitted her plea and granted Imaan pre-arrest bail for two weeks.

This development comes after Mazari's daughter accused General Bajwa and the army of being behind the detention of her mother in a land dispute case. It is also crucial to be noted that Mazari is a former human rights minister and the military has been accused of enforced disappearances by rights activists many times.

It is interesting that the military has opted for the legal course for "justice", which could be a test case for the country's criminal justice system, reported The Express Tribune.

Later, challenging the FIR, the lawyer representing Imaan said her client was being made a "victim of ulterior motives and highhandedness of the complainant and others, who are highly influential". According to the petition, "The FIR is ill-founded and allegations are absurd."

The Pakistan Constitution provides protection to the country's army against defamation. As per the analysts, the court ruling in the case of Mazari's daughter could set a precedent.

Amid protests across the world against enforced disappearances at the behest of Pakistan's security agencies, especially by the spy agency Inter-services Intelligence (ISI), Shireen Mazari earlier revealed that she was asked to appear at ISI headquarters over a bill pertaining to the issue.

Mazari said that though the bill was tabled in the National Assembly, the interior committee - which she referred to as "invisible shadows" - tried to change the bill.

She added that the amendments passed by the NA "disappeared" on the way to the senate. In witty exploitation of words, she added that she would reveal all these details if and when she wrote a book.

Notably, as per reports enforced disappearances are used as a tool by Pakistani authorities to terrorize people who question the all-powerful army establishment of the country or seek individual or social rights.

Cases of enforced disappearances have been majorly recorded in the Balochistan and the Khyber-Pakhtunkhwa provinces of the country which host active separatist movements. (ANI)