Get latest articles and stories on World at LatestLY. Amid the controversy surrounding the elections in the country's most populous province, Pakistan's Punjab Assembly is all set to hold polls for the Speaker's post where former Prime Minister Imran Khan's PTI and PM Shehbaz Sharif's Pakistan Muslim League Nawaz (PML-N) will once again come face-to-face. 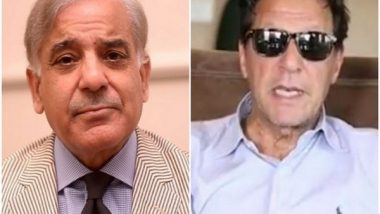 Punjab [Pakistan], July 28 (ANI): Amid the controversy surrounding the elections in the country's most populous province, Pakistan's Punjab Assembly is all set to hold polls for the Speaker's post where former Prime Minister Imran Khan's PTI and PM Shehbaz Sharif's Pakistan Muslim League Nawaz (PML-N) will once again come face-to-face.

The election for the new Speaker of the Punjab Assembly will be held on Friday however the scrutiny process of the candidates has been completed, ARY News reported on Thursday.

Though the nominations have been submitted and have been approved, still as per regulations, the candidate could withdraw the nomination before 4:00 pm Friday. The Punjab Assembly speaker's election will be held through a secret ballot at 4:00 pm, reported ARY News.

As per the reports, it was learnt that the proceedings of no-trust motion against the Punjab Assembly Deputy Speaker Dost Muhammad Mazari are likely to be started next week.

The ruling Pakistan Tehreek-e-Insaf (PTI) had earlier submitted the no-trust motion against deputy speaker Dost Muhammad Mazari in the first week of April. As per the media outlet sources, the elections of Deputy Speaker will soon be conducted.

PTI finalised Sibtain Khan for the Punjab Assembly Speaker's slot, whereas, two names were shortlisted for the position of deputy speaker including Wasiq Qayyum and Taimur Masood.

Meanwhile, PML-N-led ruling coalition now smells a rat amid political chaos in the country and is apprehensive of early elections.

Upset with some "disturbing signals" it is getting from relevant quarters, PML-N chief Nawaz Sharif is currently reviewing the situation with the possibility of returning to the party's tough stance vis-a-vis the policy of certain institutions, reported The News International.

It is also under consideration that Nawaz Sharif should restart his public interaction, both with the media and the public. "We did not want the government and were eager to go for fresh elections in May this year but were told to continue in the best interest of the country," a source said.

The PML-N-led ruling coalition took a tough and unpopular decision to save Pakistan from default. But now things are being pushed for fresh elections to the complete disadvantage of the ruling parties, particularly the PML-N, reported The News International.

This comes amid the Punjab CM fiasco, as the top court declared Mazari's ruling in the Punjab chief minister's election "illegal" and ruled that PTI's candidate Pervez Elahi will be the new CM of the province.

The court then declared Elahi as the duly elected chief minister of Punjab as it ruled that he had obtained 186 votes compared to Hamza Shehbaz's 179.

PTI-backed Pervez Elahi on Wednesday took oath as the Chief Minister of Punjab after the Supreme Court announced a verdict against the ruling of Punjab Assembly Deputy Speaker Dost Mohammed Mazari. (ANI)