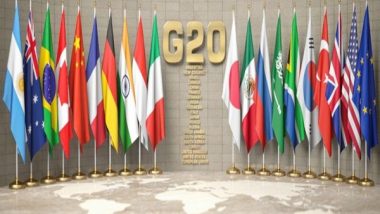 As per reports, India is planning to host certain events of G20 in J-K, reported The Express Tribune. India is set to assume the presidency of the G20 in December this year. Commerce and Industry Minister Piyush Goyal was appointed as India's Sherpa for the G20 in September 2021. G20 Summit 2022–23: MEA Invites Logo Ideas Uniquely Representing India’s G20 Presidency.

According to the Ministry of External Affairs, India will hold the G-20 presidency from December 1, 2022, and convene the first G20 leaders' summit in 2023. India's representation at G20 summits has been led by Prime Minister Narendra Modi since 2014.

Pakistan has already rejected the proposed meeting, official sources told The Express Tribune that Islamabad would reach out to G20 countries on the issue.

Sources said Pakistan would particularly approach countries like China, Turkey and Saudi Arabia to convey their concerns. Islamabad would also speak to the US, the UK and other G20 members in order to counter Indian plans, The Express Tribune reported.

Recently in March, India hosted an investment conference from Gulf countries in J-K. Entrepreneurs and CEOs from different countries including Dubai, UAE, and Holland were present at the summit. Delegates from over 36 countries attended the event.

As part of the four-day program, Manoj Sinha, Lieutenant Governor of J-K along with the Principal Secretary, Industries and Commerce, and other government officials, showcased investment opportunities with the focus on entrepreneurship, tourism, and hospitality.

An investment proposal of Rs 27,000 crores was cleared by the Jammu and Kashmir administration at the Gulf Investment Summit. The Gulf countries venture into Jammu and Kashmir is a signal to Pakistan which has been harping on the propaganda about Kashmir being a problem that needs to be settled and Muslim countries should support its argument.