Ahead of India's G20 Presidency, a leading global forum for international economic cooperation, the Ministry of External Affairs has announced the launch of a logo design competition, asking for ideas that "uniquely represent Indian G20". 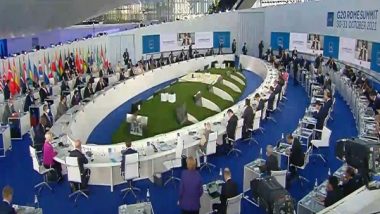 New Delhi, May 7: Ahead of India's G20 Presidency, a leading global forum for international economic cooperation, the Ministry of External Affairs has announced the launch of a logo design competition, asking for ideas that "uniquely represent Indian G20".

India will hold the Presidency of the G20 from 1 December 2022 to 30 November 2023. India will host the G20 Summit in 2023. The G20 is the premier forum for international economic cooperation that plays an important role in global economic governance. Vladimir Putin, Volodymyr Zelensky Both Invited to G20 Summit 2022, Says Indonesian President Joko Widodo.

With the G20 Presidency, New Delhi will set the agenda for the meeting. Taking to Twitter, Ministry of External Affairs Spokesperson Arindam Bagchi tweeted: "Delighted to announce the launch of a Logo Design Contest for India's forthcoming G20 Presidency. Share with us your idea of what represents a uniquely Indian G20. We are open for entries till 07 June 2022."

The G20 Presidency undertakes a wide range of activities to help members discuss and coordinate policy on matters of common interest. India's ambitious foray into the global economy, with its human capital and entrepreneurship, has underlined its leadership among the emerging and developing economies. India's vital role in global economic governance has fostered its active participation in the G20 process.

Starting in 1999 with a meeting of the finance ministers and the central bank governors, the G20 has evolved into a yearly summit involving the Heads of States and Governments.

In addition to that, the Sherpa meetings (in charge of carrying out negotiations and building consensus among leaders), working groups, and special events are also organized throughout the year.

Each year, the Presidency invites guest countries, which take full part in the G20 exercise. Several international and regional organizations also participate, granting the forum an even broader representation. This year the G20 summit will be held on November 15-16 in Bali under the Presidency of Indonesia.