Three researchers from China's Wuhan Institute of Virology sought hospital care after they fell ill in November 2019, a month before Beijing reported the first patient with Covid-like symptoms, the Wall Street Journal reported. 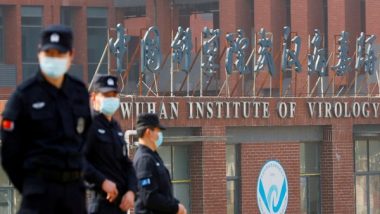 Washington, May 24: Three researchers from China's Wuhan Institute of Virology sought hospital care after they fell ill in November 2019, a month before Beijing reported the first patient with Covid-like symptoms, the Wall Street Journal reported.

The report provides fresh details on the number of researchers affected, the timing of their illnesses, and their hospital visits.

The revelations come amid growing calls for a fuller probe on whether the Covid-19 virus may have escaped from the Chinese laboratory. It also comes on the eve of a meeting of the World Health Organization's decision-making body, which is expected to discuss the next phase of investigation into the origin of Covid-19. Global COVID-19 Caseload Tops 166.4 Million, Deaths Surge to More Than 3.44 Million: Johns Hopkins University.

A US State Department fact sheet released by the Trump administration in January said that the researchers had become sick in autumn 2019 and displayed "symptoms consistent with both Covid-19 and common seasonal illness.".

China reported to the World Health Organization (WHO) that the first patient with Covid-like symptoms was recorded in Wuhan on December 8, 2019.

"The US government has reason to believe that several researchers inside the WIV became sick in autumn 2019, before the first identified case of the outbreak, with symptoms consistent with both Covid-19 and common seasonal illnesses," the report read.

The Wall Street Journal reported that the current and former officials familiar with the intelligence about the lab researchers expressed differing views about the strength of the supporting evidence for the assessment.

One person said that it was provided by an international partner and was potentially significant but still in need of further investigation and additional corroboration.

Another person described the intelligence as stronger. "The information that we had coming from the various sources was of exquisite quality. It was very precise. What it didn't tell you was exactly why they got sick," he said, referring to the researchers.

Recently, Anthony Fauci, a top adviser to US President Joe Biden on the coronavirus pandemic said he's "not convinced" the deadly virus developed naturally and has called for further investigations into where it emerged.

Fauci was asked during a Poynter event, "United Facts of America: A Festival of Fact-Checking," earlier this month about whether he was confident that Covid-19 developed naturally, Fox News reported.

"No actually. I am not convinced about that. I think we should continue to investigate what went on in China until we continue to find out to the best of our ability what happened," Fauci, the director of the National Institute of Allergies and Infectious Diseases, said.

"Certainly, the people who investigated it say it likely was the emergence from an animal reservoir that then infected individuals, but it could have been something else, and we need to find that out. So, you know, that's the reason why I said I'm perfectly in favor of any investigation that looks into the origin of the virus," he added.

It is a reversal from his earlier position in which he dismissed theories that COVID-19 emerged from the Wuhan Institute of Virology.

Last Thursday, Republicans on the House Intelligence Committee released a report claiming there is "significant circumstantial evidence" that the coronavirus originated from a leak at China's Wuhan Institute of Virology, and that the US government "may have funded or collaborated" in the research that led to it.

"International efforts to discover the true source of the virus, however, have been stymied by a lack of cooperation from the People's Republic of China," the Republicans wrote in the report.

Recently, findings in a report in an Australian daily has yet again reinforced the call that international investigators must dig deeper to rule out whether Covid-19 is a made-in-China bioweapon.

The controversy about Covid-19 origins has resurfaced after the Weekend Australian newspaper revealed that Chinese scientists were thinking about bioweapons, visualising a World War-III scenario.

The daily cited a Chinese government document that discussed the weaponisation of SARS coronavirus. Titled the Unnatural Origin of SARS and New Species of Man-Made Viruses as Genetic Bioweapons, the 2015 paper was authored by Chinese scientists, Chinese public health officials and members of the People's Liberation Army (PLA).

China refused to give raw data on early Covid-19 cases to the WHO-led team probing the origins of the pandemic. Beijing has been accused of delaying access to international investigators for months after the initial outbreak, virtually guaranteeing that the lab had been deep-cleaned before any forensic analysis could be done.

Last month, the US Secretary of State Antony Blinken launched a scathing attack against China for a lack of transparency during "the early stages" of the coronavirus pandemic and called for a more thorough investigation into the origins of Covid-19.

Blinken's remarks came following the publishing of a joint inquiry by the World Health Organization and China in March.

The inquiry did not conclusively establish how or when the virus began spreading and did little to address Western concerns that the Chinese Communist Party bent the investigation to its advantage.

The WHO report determined that the possibility the virus came from a lab was "extremely unlikely," noting there was "no record" any lab had closely related viruses.

The probe was criticised by the US, UK, and other governments over its limited access to "complete, original data and samples."

The organization was also accused of being overly deferential to China throughout the course of the study, which was co-authored by 17 Chinese scientists -- several of them from state-run institutions.