Russia-Ukraine War: Key Things To Know About the Russo-Ukrainian Conflict So Far

Russian Foreign Minister Sergey Lavrov said that a “business-like spirit” has emerged in the diplomatic talks, which he described as focused on a "neutral status" for Ukraine's military. 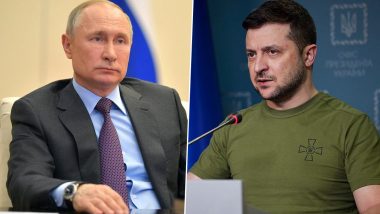 Kyiv, March 16: As Russia's offensive pressed closer to Ukraine's seat of government, missiles and artillery slammed into high-rise apartment towers in Kyiv on Wednesday, setting buildings ablaze and sending smoke over the capital and its suburbs.

Russian forces escalated their bombardment of Ukrainian cities, including Kharkiv and the besieged port of Mariupol, intensifying the war's humanitarian toll and leaving cities smoldering. But diplomatic activity is quickening, as well. Russia-Ukraine Conflict: Prices of Anti-Radiation Tablets Skyrocket; Here’s Why.

Russian and Ukrainian negotiators agreed to meet again on Wednesday after a fourth round of talks that Ukrainian President Volodymyr Zelenskyy described as “more realistic” than previous meetings. He urged patience as officials prepared to return to the negotiating table.

Russian Foreign Minister Sergey Lavrov said that a “business-like spirit” has emerged in the diplomatic talks, which he described as focused on a "neutral status" for Ukraine's military.

Here are some key things to know about the conflict:

WHAT IS HAPPENING ON THE GROUND?

Shrapnel from an artillery shell smashed into an apartment in the center of Kyiv early Wednesday, wiping out the building's top floor and sparking a fire. Emergency services reported two victims from the blaze, without specifying if they were killed or injured.

The leaping flames and thick smoke that have engulfed Kyiv apartment towers in recent days pointed to a possible new stage in the war, puncturing the sense of calm that had returned to the capital after Russia's initial advance.

Fighting continued to rage in Kyiv's suburbs, depriving thousands of heat and clean water. Russian troops were seeking to sever the capital from transport routes and supply lines as they planned a wider assault, a local official said.

A Russian airstrike slammed into the town of Markhalivka southwest of the capital and destroyed residential apartments, authorities added. The extent of the damage remained unclear.

Russia now occupies the city of Ivankiv, 80 kilometers (50 miles) north of Kyiv, and controls the surrounding region on the border with Belarus, local officials said.

A ceaseless barrage of strikes pounded the northeastern city of Kharkiv close to the Russian border that has suffered repeated bombardment. Ukrainian forces continued to thwart Russia's incursion into the heart of the city, authorities said.

Powerful explosions also thundered in the region around Kherson, a strategic Black Sea port, and near a train station in the southeastern energy-production hub of Zaporizhzhia.

The region "is on the verge of a humanitarian catastrophe,” Zelenskyy's office warned.

ARE UKRAINIANS ABLE TO EVACUATE?

In the southeast, over 28,800 civilians escaped the blockaded port of Mariupol through several humanitarian corridors.

The successful evacuation came even as Russian forces have renewed their shelling on the coastal city, where hundreds of thousands of civilians have struggled to stay alive without heat, food and clean water. Russian troops seized the city's largest hospital late Tuesday, holding hundreds people hostage inside the building, a regional official said.

Humanitarian convoys again failed to make it into Mariupol because of the Russian assault but managed to deliver aid and set up evacuation corridors from Ukraine's northeastern Sumy region. The head of the Red Cross, which has helped organize the evacuations, arrived in Kyiv Wednesday to push for better humanitarian aid access and protection for civilians.

WHAT HAS THE AP DIRECTLY WITNESSED OR CONFIRMED?

In Mariupol, workers afraid for their own lives brave relentless shelling to dump the bodies of children in a mass grave. Local officials struggle to account for the dead. Although they've tallied 2,500 deaths in the siege, many bodies crushed in the rubble can't be counted because of the assault.

Bodies lie out in the street. Workers tell families to leave their dead outside because it's too dangerous to hold funerals.

"Why? Why? Why?” sobbed Marina Yatsko from a hospital hallway, after medical workers could not save her toddler, struck in the head by shrapnel.

In the chaos and destruction of besieged Kharkiv, doctors are struggling to treat COVID-19 patients as the bombs fall outside.

“Bombing takes place from morning into night," hospital director Dr. Pavel Nartov told The Associated Press. “It could hit at any time.”

HOW IS THE WORLD RESPONDING TO THE WAR?

The leaders of three European countries, Poland, the Czech Republic and Slovenia, returned on Wednesday from a risky trip to the besieged Ukrainian capital to show their support. They met with Zelenskyy and expressed their hope that Ukraine would achieve its aspirations to join the European Union as fires burned in the wreckage wrought by Russian strikes outside.

Following Zelenskyy's scheduled virtual address to the U.S. Congress later Wednesday, President Joe Biden is expected to announce that the U.S. is delivering $800 million in new military assistance to Ukraine, according to a White House official. The sum includes money for anti-armor and air-defense weapons, bringing the total announced in the last week alone to $1 billion.

Biden also plans to travel to Europe next week for face-to-face talks with European leaders about the Russian invasion, and will attend an extraordinary NATO summit in Brussels. NATO has been bolstering its eastern flank with troops and equipment to deter Russia from invading any of its members.

Around the word, governments continued to punish Moscow for its invasion. The U.S. targeted the assets of Russian military officials in an additional round of sanctions. The European Union imposed sanctions on Chelsea FC owner Roman Abramovich and announced new measures to deny Russian oligarchs high-end luxury goods.