The protests began after George Floyd, a black man in Minneapolis, died after a white officer jammed his knee into Floyd's neck for several minutes as other officers watched. 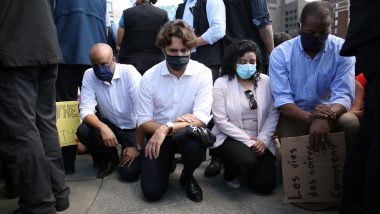 Toronto, Jun 6: Canadian Prime Minister Justin Trudeau attended an anti-racism protest Friday and took a public knee in solidarity with demonstrators. Trudeau arrived on Parliament Hill in Ottawa with security guards, wearing a black cloth mask. After a few protesters asked him to kneel, he did.

They thanked him afterwards. He nodded as demonstrations chanted “Black lives matter.” Trudeau said earlier this week that Canadians are watching what is unfolding in the United States with “horror and consternation” and he paused for 21 seconds when asked about US President Donald Trump and the use of tear gas against protesters to clear the way for a photo opportunity. US President Donald Trump Defies Governor, Heads to Maine Where Protesters Await.

The Ottawa protest was one of multiple events in Canada on Friday, following days of demonstrations against racism and police brutality in numerous American cities. The protests began after George Floyd, a black man in Minneapolis, died after a white officer jammed his knee into Floyd's neck for several minutes as other officers watched.

Toronto Police Chief Mark Saunders and other uniformed officers met with a group of protesters, then removed his hat, and took a knee near police headquarters. 'George Floyd Looking Down and Saying This is Great', Says Donald Trump as Unemployment Rate Dips in US.

“We see you and we are listening,” Saunders, who is black, tweeted after the meeting. “We have to all stay in this together to make change.” Trudeau acknowledged last year during the federal election that he let down his supporters — and all Canadians of color — by appearing years ago in brown face and black face.