British Prime Minister Boris Johnson faced off one of the biggest rebellions of his premiership from within his own party to make COVID-19 vaccine certification mandatory in the country from Wednesday. 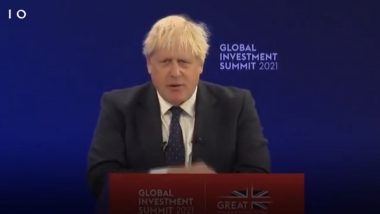 London, December 15: British Prime Minister Boris Johnson faced off one of the biggest rebellions of his premiership from within his own party to make COVID-19 vaccine certification mandatory in the country from Wednesday.

Adults in England must now show a so-called “COVID Pass” as proof of being double vaccinated to enter nightclubs, big sports matches and other large events after Parliament passed the rules on Tuesday night, despite 99 Conservative Party MPs voting against the government's plans. Also Read | Chinese Teachers Unsure Whether To Implement COVID-19 Protocols or Teach New Subject on Grandpa Xi Jinping.

The Opposition Labour Party had already said it would be backing the plans in the interest of frontline health workers. Labour leader Sir Keir Starmer said it was a "very significant blow to the already damaged authority of the Prime Minister". Also Read | Omicron to Be Dominant COVID-19 Variant by Mid-January, Says EU Official.

"It confirms that he's too weak to discharge the basic functions of government," he declared after the vote. The new rules cover indoor unseated venues with a capacity of more than 500 people, unseated outdoor venues that hold more than 4,000 people, and any venue with more than 10,000 people.

From Wednesday, proof of full vaccination or a negative PCR or lateral flow test within the last 48 hours will be compulsory for entry to such venues. Other parts of the United Kingdom's devolved administrations have similarly strict entry norms for venues.

The House of Commons also backed, with fewer Conservative MPs disagreeing, the continuation of mandatory mask-wearing in most indoor settings, and compulsory vaccination for National Health Service (NHS) workers in England.

The scrapping of self-isolation for fully vaccinated COVID contacts, in favour of daily lateral flow tests instead, passed unanimously without a vote.

Meanwhile, Dr Jenny Harries, the chief executive of the UK Health Security Agency (UKHSA), told a Commons committee of MPs on Wednesday that the Omicron variant "is probably the most significant threat [to public health] since the start of the pandemic".

The numbers and data coming out in the next few days will be "staggering" when compared to other variants, she warned. The seriousness levels of these infections would only become clear at a later stage the world over, she added.

"We are turbocharging the vaccine rollout to ensure as many people as possible can get boosted now as we continue our fight against the Omicron variant," said UK Health Secretary Sajid Javid.

With all adults now eligible for a third top-up vaccine dose, queues at vaccination centres continue as people try to get ahead of the Omicron curve. “As part of our Get Boosted Now vaccination drive we need to increase our jabbing capacity to unprecedented levels,” said Johnson in a fresh appeal for volunteers.

“I'm issuing a call for volunteers to join our national mission to get jabs in arms. We need tens of thousands of people to help out – everyone from trained vaccinators to stewards.

"Many thousands have already given their time – but we need you to come forward again, to work alongside our brilliant GPs, doctors, nurses and pharmacists, to deliver jabs and save lives. So please come forward if you can,” he said.

Downing Street said there are now almost 3,000 vaccine sites across the UK, staffed by over 90,000 volunteers who have given up 1.1 million hours of time so far.

In the next week hundreds more sites, mobile units and pop ups will be springing up across the country. These will be in a range of locations that will make it as easy as possible for people to get boosted – such as at football stadia, shopping centres and racecourses.

The move follows UKHSA evidence that suggests the Omicron variant is extremely transmissible and while two jabs are not enough to protect against infection, a third booster dose does ramp up the body's defences against it considerably.