Get latest articles and stories on World at LatestLY. Following the country's most severe outbreaks, the Chinese premier Xi Jinping gave another blow to China's already crippled economy as he doubled down on his 'Zero-Covid policy' in an attempt to contain the rising COVID-19 infections. 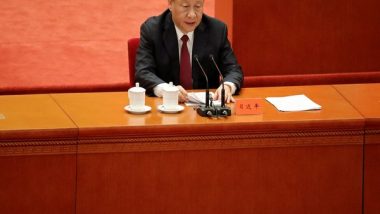 Beijing [China], May 14 (ANI): Following the country's most severe outbreaks, the Chinese premier Xi Jinping gave another blow to China's already crippled economy as he doubled down on his 'Zero-Covid policy' in an attempt to contain the rising COVID-19 infections.

Xi's renewed commitment to zero COVID highlights his willingness to deprioritize economic growth in favour of political and social issues that he considers more urgent, The Diplomat reported.

Xi Jinping has put his personal stamp on China's zero-Covid strategy, with state media often reporting that he has "personally commanded and made arrangements" for the country's fight against the pandemic.

The stringent, frequent lockdowns continue to fuel public discontent while the Chinese economy is witnessing a heavy blow.

The initiatives where Xi has sacrificed growth have been facilitated by a clear socio-political rationale, strong stakeholder support, and a stable economy. But zero-covid is now increasingly unable to depend on such favorable conditions as the virus has become less deadly but more infectious, support for the policy has waned, and the health of China's economy appears to be rapidly deteriorating.

If activity remains depressed over the next one or two quarters, the economic and social effects would start to be felt much more acutely, reported The Diplomat, citing local Chinese media reports.

It is precisely this sort of politically destabilizing scenario that Xi needs to avoid and that could ultimately force him to change direction on zero COVID.

In April, China's services sector, which accounts for more than half of the nation's GDP and over 40 per cent of its employment, contracted at the second sharpest pace on record, while the manufacturing sector also shrunk, reported CNN.

While Omicron spreads in other parts of China, more local governments are imposing swift lockdowns in response to just a handful of cases. Since April 20, Beijing has reported more than 500 cases. Many fear a Shanghai-style lockdown as authorities roll out increasingly restrictions. (ANI)