Like Bollywood celebrities, our TV couples also got lucky this year as they were blessed with the little ones in their lives. Anita Hassanandani - Rohit Reddy, Nakuul Mehta- Jankee Parekh, Shaheer Sheikh-Ruchika Kapoor embraced first-time parenthood this year. 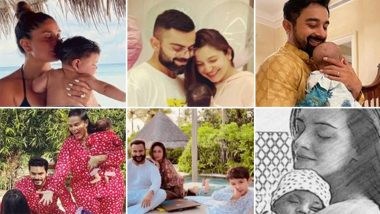 While most people's lives have been negatively affected by the COVID-19 pandemic, it has proven to be a blessing in disguise for many, especially for those who embraced parenthood in 2021. Several Bollywood stars and TV celebrities, too, welcomed new members to their families this year. From Kareena Kapoor Khan - Saif Ali Khan to Virat Kohli- Anushka Sharma and Neha Dhupia-Angad Bedi, the year of 2021 saw these bigwigs making headlines with the addition of the newborns to their lives. As 2022 is approaching, let's look back at the celebrity couples and their little ones. Year Ender 2021: Squid Game, Hellbound - Five Kdramas Of The Year That Left The World Highly Impressed!

Kareena Kapoor Khan and Saif Ali Khan have rightly proved that parenting has no age requirement. On February 21, 2021, the two got blessed with son Jeh.Kareena was 36 when she became a mother for the first time with the birth of Taimur in 2016, and after five years, at the age of 41, she once again got the title of 'mommy'. "We are very pleased to announce that we are expecting an addition to our family. Thank you to all our well-wishers for all their love and support," the couple announced the arrival of Jeh via joint statement. Recently, Kareena urged everyone to not make a taboo of late pregnancy. "I never planned to have a baby because you know I was like in 36 or Oh my biological clock is ticking so I need to speed it up or whatever. That was not even a thought or discussion because I was like I married Saif for love.I did that. I wanted to have a child so I did it. It so happened. I didn't give much thought because my thought was always on my work and you know being happy and content with myself. So I don't think late mothers should have this pressure," she had said. Kareena and Saif's sons are the paparazzi's favourite and the same can be said for the fans who eagerly wait for the Jab We Met actor to share what her children are upto.

Virat Kohli and Anushka Sharma are considered as one of the power couples in the country and everyone was eagerly awaiting when the duo will become parents and this wish came true on January 11, 2021, as Anushka gave birth to daughter 'Vamika'. It is important to note that Kohli's post on Twitter announcing the birth of his daughter was the most liked post on the platform in 2021. "We are thrilled to share with you that we have been blessed with a baby girl this afternoon. We thank you all for your love, prayers and good wishes. Anushka and the baby are both healthy and we are feeling beyond blessed to start this new chapter of our lives," Kohli had tweeted on January 11 this year. Anushka and Virat have always been protective of their daughter and several videos have surfaced in which the India Test skipper can be seen requesting the paps to not take any pictures of their daughter Vamika. Year Ender 2021: From Mohanlal's Drishyam 2 to Tovino Thomas' Minnal Murali, 11 Best Malayalam Films of 2021 and Where to Watch Them Online (LatestLY Exclusive).

October 3, 2021, turned out to be one of the happiest days for Neha Dhupia and Angad Bedi as their family of three became four on the particular date.Angad announced the arrival of his son via Instagram post. "The almighty today blessed us with a baby boy. Both Neha and the baby are well. Mehr is ready to pass on the 'baby' title to the new arrival. #Bedisboy is here!!!!!Waheguru mehr kare @nehadhupia thank you for being such a warrior through this journey. Lets make it a memorable one for all 4 of us now," he had posted. For the unversed, Neha and Angad got married in a hush-hush ceremony in May 2018. They became parents to Mehr on November 18 the same year. The couple has not revealed the name of their son yet.

With the birth of their son Jovaan on July 10 earlier this year, 'ghar ki raunak' has surely doubled up in actor Geeta Basra and former cricketer Harbhajan Singh's house. "I always wanted two children. It's very important to have a sibling for your child. I also have a sibling...so I know how protective you feel when you have a sibling. I feel 'bachon se ghar ki raunak dugni ho jaati hai' and Jovan's presence has undoubtedly doubled our 'raunak'," Geeta had told ANI.Geeta and Harbhajan also have a daughter, Hinaya, who was born in 2016.Becoming mother for the second time was not a smooth ride for Geeta as she suffered two miscarriages before delivering Jovaan.

The year of 2021 will always remain special for actor Aparshakti Khurana and his wife Aakriti Ahuja as they witnessed the birth of their daughter Arzoie on August 27. New-father shared the heartfelt post on his Instagram to announce the arrival of the little one. "Aakriti and Aparshakti welcome with love Arzoie A.Khurana. Born August 27th, 2021," the post read. Arzoie was born in Chandigarh, which is Aparshakti and his brother Ayushmann Khurrana's hometown. Aparshakti had travelled to Chandigarh after fulfilling his work commitments to be with his wife in the crucial time.

Dia Mirza, who tied the knot with Vaibhav Rekhi in an intimate ceremony on February 15 earlier this year, became a mother to a baby boy Avyaan after four months of marriage. In her Instagram post in July, Dia had shared that she had an early delivery after suffering a sudden appendectomy during her pregnancy. "Our story has only just begun Avyaan 15.09.2021 We are deeply grateful to many good people who took very good care of you Avyaan in the first 4 months of your life. Dr. Hari, Dr.Jui, Dr. Pradeep, Dr.Anish and all the nurses and @suryahospitals under the able leadership of Dr.Awasthi and Dr.Kabra We will be forever grateful for the care and love you received from all of them. Dr. Nozer and Rajneet our baby is finally home And this would not have been possible without your response and timely care. A lifetime of gratitude to you Avyaan, you have taught us humility, grace, and the power of prayer Stay blessed baby. You complete us in every way," Dia, who also shares a good bond with her stepdaughter Samaira, had written while announcing the birth of her son. Dia was previously married to Sahil Sangha. They separated in 2019 after 11 years of togetherness.

Hum Do Humare Do -- that's what actor Rannvijay Singha and his wife Prianka Singh can now proudly say. In July, the two became parents for the second time with the birth of their son Jahaan. Rannvijay has been married to Prianka for six years and they also have a four-year-old daughter, Kainaat. Only a few days ago, Rannvijay expressed his gratitude to God for blessing him with the son this year. "The best thing that happened to us was Jahaan!@jahaanvirsingha #satnamwaheguruG.E.O. #blessed #grateful #2021," he posted on Instagram.

Like Bollywood celebrities, our TV couples also got lucky this year as they were blessed with the little ones in their lives. Anita Hassanandani - Rohit Reddy, Nakuul Mehta- Jankee Parekh, Shaheer Sheikh-Ruchika Kapoor embraced first-time parenthood this year. Now all eyes are on 2022 as a lot of celebrities including Iqbal Khan and his wife Sneha Khan, Bharti Singh and Haarsh Limbachiyaa among others would be welcoming children in the next year too.