While 2020 people crushed over Kdrama romance with Crash Landing On You, Start Up, etc, this year the content edged past the mush to display some brutal games, demons and others. Let us tell you about the Korean series that created mass hysteria in 2021. 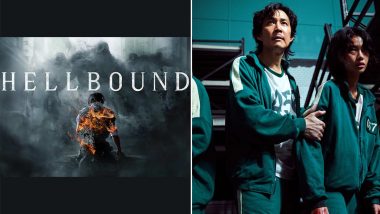 Netflix did get one thing very right apart from creating some stellar overseas content. The pandemic years saw people gravitating towards Kdramas like never before. Many Indians who had inhibitions about the content and a prejudiced mindset can be seen Aww-ing over Park Seo Joon or dancing to BTS' 'Butter'. With everyone trapped at home, South Korean content became their solace and today, there are scores of fan clubs pledging their allegiance. 2021 was no different with Netflix showcasing more content which prompted many of its rivals OTT players to display Kdramas on their platforms. Crash Landing On You, Hotel Del Luna, Vincenzo – 5 Kdramas To Get An American Remake Soon.

What's interesting about this year is the variety. While 2020 people crushed over the romance Crash Landing On You, Start Up, this year the content edged past the mush to display some brutal games, demons and others. So while we wrap up yet another uncertain year, let us tell you about the Korean series that created mass hysteria this year.

Who would have thought that a game played by kids in South Korea could turn so sinister and murderous? A honeytrap many flocked to but not all could survive. From being a series that was rejected by many networks to becoming one of the most watched Kdramas in the history of Netflix, Squid Game is a revolution now. Anupam Tripathi In Squid Game, Kubbra Sait In Foundation – 7 Indian Actors Creating Waves In International Shows.

You could say Hellbound slightly benefited from the euphoria of Squid Game as people were lapping up all things Korean even more. But the ultimate stickiness of the content was its unique view on deal with the devil and its consequences. Think Supernatural and then turn the deadliness a couple of notches...that's Hellbound.

Beyond Evil doesn't have an exceptionally original story. Two cops investigate a murder that mirrors a cold case while they try to keep their secrets hidden. You will find more such stories on Netflix itself but where it scored is the way the series in written. Dark, nuanced, thrilling and at times, mind boggling, Beyond Evil can easily be a guide book for those who swear by hit formula but are also open to some finesse.

A Taxi driver and his team saves justice from losing face when criminals walk free without consequences. Yet again this series displays a fantastic way of telling a story which isn't uncommon but can be refined to great levels. Add to it some fab performances and Taxi Driver is the best thing on the internet today.

Love and action take prime seats here and that's where it won. While Song Joong-Ki and Jeon Yeo-been's chemistry is electrifying, the presentation of the series is simple striking. Be it the CGI or stunts, a deeply satisfying experience. Did we mention superlative comedy as well? Now we did!

(The above story first appeared on LatestLY on Dec 28, 2021 07:54 PM IST. For more news and updates on politics, world, sports, entertainment and lifestyle, log on to our website latestly.com).