Kia, South Korea's second-biggest carmaker, on Monday launched an all-electric EV6 sedan in the domestic market ahead of its overseas launches later this year. 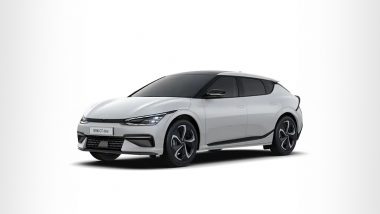 Kia has received over 30,000 preorders for the EV6 in the domestic market, and a combined 8,800 preorders in Europe and the United States, the company said.

The maker of the K5 sedan and the Sorento SUV aim to sell 13,000 units of the zero-emission model on its home turf and 17,000 units in overseas markets this year, reports Yonhap news agency.

In April, Kia's bigger affiliate Hyundai Motor Co. launched the IONIQ 5 all-electric model equipped with the E-GMP platform. Hyundai plans to introduce the IONIQ 6 next year and the IONIQ 7 large SUV in 2024. It will begin using alphanumeric names like its bigger rivals, such as BMW, whose models are named Series No 1-8.

(The above story first appeared on LatestLY on Aug 02, 2021 11:25 AM IST. For more news and updates on politics, world, sports, entertainment and lifestyle, log on to our website latestly.com).