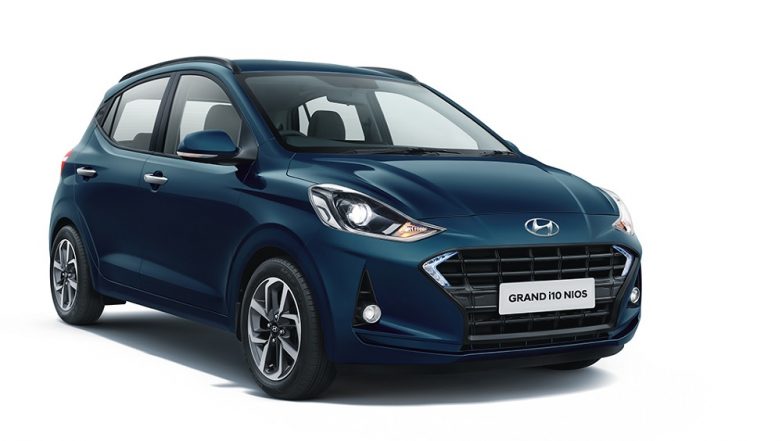 Hyundai India, country's second largest car maker will be launching a brand new car in the Indian market tomorrow. To be called as Grand i10 Nios, the car will be introduced as a successor to Grand i10, which will also remain on sale alongside the new Nios. To be offered in both petrol and diesel versions, the upcoming Grand i10 Nios will be seen in 5 variants - Era, Magna, Sports, Sports Dual Tone and Asta. Apart from powertrain options, the car will also be offered in manual and automatic gearbox options. The Grand i10 Nios will be made at company's plant near Chennai. Hyundai Grand i10 Nios First Production Model Rolled Out From Chennai Facility; India Launch on August 20.

Mechanically, the upcoming Grand i10 Nios will be borrowing the powertrain options from the current generation Grand i10. The small hatchback is offered in both petrol and diesel engines wherein the petrol mill is a 1.2-litre unit while the diesel engine is also a 1.2-litre CRDi oil burner. Transmission duties on the hatchback will be carried out by 5-speed manual as standard along with optional automatic gearbox. Hyundai Grand i10 Nios Hatchback Revealed; India Launch, Expected Price, Bookings & Specifications.

The new generation i10 will feature company's signature style cascading grille upfront along with boomerang shaped LED DRLs that gives an appealing look upfront. On the inside, the overall design seems to be very identical to other Hyundai cars which also gets touchscreen infotainment system, new steering wheel and much more.

When launched in the country, the latest offering from Hyundai India will be pitted against the likes of Maruti Suzuki Swift, Ford Figo and Renault Triber. The company is expected to keep the prices of Grand i10 Nice very competitive. We speculate that the car will be launched in between Rs 5 lakh to Rs 8 lakh (ex-showroom).