BBMA 2019: Priyanka Chopra and Nick Jonas’ Liplock Is Proof That They Are Suckers for PDA – Watch Video 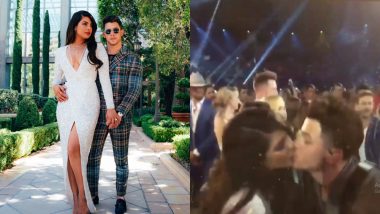 Priyanka Chopra and Nick Jonas are the power couple we all are crushing on currently. The couple was spotted attending the Billboard Music Awards 2019 in Los Angeles last night. Of course, the videos are going viral now. Add a cute kiss to the mix and we know fans have a video that they will cherish forever. So, what happened was that The Jonas Brothers were performing at the music event when they made their way to the stage through the crowd. When Nick walked past his lovely wife, he decided to give her a brief kiss.

Goes without saying that Priyanka and Nick were looking like a million bucks at Billboard Music Awards 2019. The Jonas Bros performed a medley of Cake by the Ocean, Sucker, and Jealous. Priyanka and Nick will make another appearance together very soon as they will host the Met Gala Benefit 2019. BBMAs: The Jonas Brothers Perform to ‘Sucker’ but Its Sophie Turner, Priyanka Chopra Jonas, Danielle Jonas Who Steal the Show (Watch Video).

Check out the kiss between Priyanka and Nick in the video below:

Priyanka Chopra kissing Nick Jonas during his #BillboardMusicAwards performance is the cutest. pic.twitter.com/sRi8DgRXc1

Also, check out this glamorous picture of Nick Jonas and Priyanka Chopra below:

On the work front, Priyanka was last seen in the comedy, Isn't It Romantic, playing a supporting role. Earlier, she also hosted YouTube special, If Only I Could Tell You Just One Thing. She will be next seen in the Bollywood movie, The Sky is Pink, which also features Zaira Wasim and Farhan Akhtar. Priyanka has also announced that she will star alongside Mindy Kaling in a comedy which will revolve around Indian weddings.

(The above story first appeared on LatestLY on May 02, 2019 06:19 PM IST. For more news and updates on politics, world, sports, entertainment and lifestyle, log on to our website latestly.com).