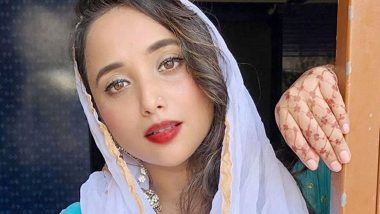 In the light of Sushant Singh Rajput's death by suicide, several artists have opened up about their experience with depression. Showbiz comes with a lot of pressures, be it handling success or social media bullying and many other things. Recently, Bhojpuri actress Rani Chatterjee took to Instagram to share a post about going through a tough time and undergoing depression. The actress in her post revealed the reason for her depression and sought help from Mumbai Police as she requested them to help her nab Dhananjai Singh who has allegedly been harassing her. Bigg Boss 13: Rani Chatterjee to Add Bhojpuri Tadka to Salman Khan’s Reality Show This Year?

In her post, Rani wrote about Dhananjai allegedly writing offensive posts hinting at her with usage of terms such as "Fat" and "Old". The actress in her post claimed that she tried speaking to a lot of people about what she has been going through but their advise to "ignore" hasn't been easy for her. Rani also attached a few screengrabs of Dhanjai's posts and a picture of his profile. In her post, she also stated that if she dies by suicide then Singh would be responsible for the same.

A post shared by Rani Chatterjee Official (@ranichatterjeeofficial) on Jun 30, 2020 at 8:07am PDT

Several fans of the actress have come in support of her and left comments encouraging her to stay positive and fight. A week ago, Rani had taken to Instagram to write about facing depression due to social media. She wrote, "Whenever I feel depressed or I feel any stress, I check social media, then I become more depressed, I think that social media now makes you more sad than making you happy #facebook #instagram." Mumbai Police is yet to respond to Rani's post.

(The above story first appeared on LatestLY on Jun 30, 2020 10:13 PM IST. For more news and updates on politics, world, sports, entertainment and lifestyle, log on to our website latestly.com).