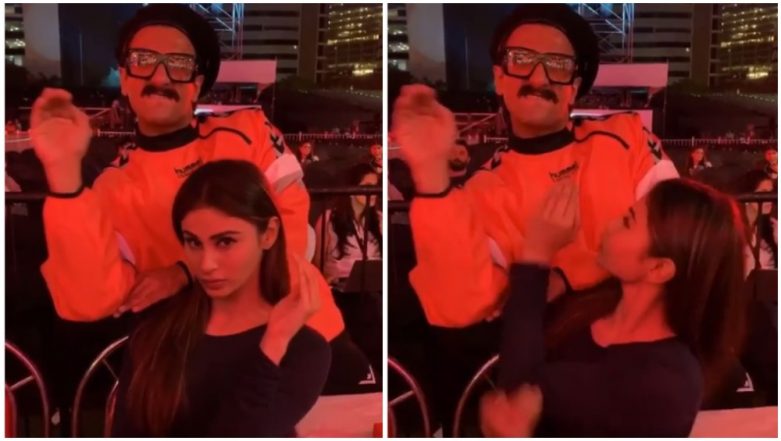 Ranveer singh gets goofy with Mouni Roy at the rehearsals. (Photo Credits: Instagram)

It is that time of the year again when Bollywood’s biggest and brightest stars assemble under one roof for the 64th edition of the Vimal Filmfare Awards. While the event is yet to kick start, social media has already been flooded with multiple pictures and videos of the celebrities preparing for their magical and scintillating performances at the star-studded event. While majority of the B-town are busy looking their best, some actors are already high on josh. We just came across a video and it explains that there's a lot of madness that happening right now. We got our hands on Ranveer Singh’s boomerang with Brahmastra actor Mouni Roy, which is surely creating a buzz on the social media. 64th Vimal Filmfare Awards 2019: Janhvi Kapoor Glamorous Avatar for the Star-Studded Affair Will Leave You Awe-struck! See Pic

In the video, the Padmaavat star can be seen goofing around with Mouni in the middle of the rehearsals. Yes, the two are seen posing like snakes in the boomerang video and it is absolutely funny. Filmfare's official Instagram handle have shared the video and wrote, "Things are getting goofy at the rehearsals of the #VimalFilmfareAwards 2019. Here’s a glimpse of all the fun with @ranveersingh and @imouniroy."

Raising the glamour quotient at the awards night, the Baadshah of Bollywood, Shah Rukh Khan will host the Filmfare 2019, which will be star studded with the who’s who of Bollywood including actors, filmmakers and musicians. While the nomination list had caused some uproar among fans, the winner list will be worth the wait. Also, the generation actors such as Vicky Kaushal, Janhvi Kapoor, Rajkummar Rao, among others will not only be seen presenting the awards but also be entertaining the audience with some of their engaging performances.