9 Years of Ishaqzaade: 5 Interesting Facts You Did Not Know About Arjun Kapoor – Parineeti Chopra’s Film

Last year, Arjun had shared pictures of the script of the film along with some scribbled notes from 8 years ago while expressing gratitude to the film's cast and crew on the special occasion. Parineeti Chopra had shared the pictures of her national award. 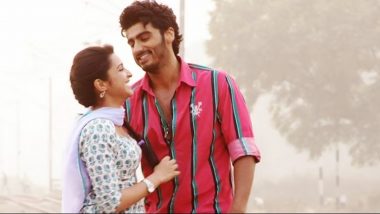 Arjun Kapoor and Parineeti Chopra starrer romantic-drama Ishaqzaade complete its nine years of the release today. The film marked Arjun's debut in Bollywood, and the film was widely well-received by the audience and the critics. Parineeti Chopra had even received a national award because of the movie. The film was helmed by Habib Faisal, and produced by Aditya Chopra under Yash Raj Films. 8 Years of Ishaqzaade: Arjun Kapoor Celebrates The Milestone of His Debut, Holding the Film's Original Script.

Ishaqzaade is very close to both Arjun and Parineeti's heart. Their characters - Parma Chauhan and Zoya Qureshi became iconic characters, and the chemistry between the two actors was widely appreciated as well. Not just the story, but the songs of the film were equally loved by the audience, and even today people croon to the songs from the film.

Today, as the film completes 9 years of its release, check out some interesting trivia about the film.

Gauahar Khan and Arjun Kapoor got a standing ovation from the unit after they shot for their song "Chokra" It so happened that during the shoots of the song, the temperature in Barabanki, UP were very low. People were concerned whether the two actors would be able to shoot as Arjun was to wear a wet vest and Gauahar a tiny blouse. The two, however, gave a great shot and completed the song.

The film was initially titled Tevar. The makers later changed it to Ishaqzaade. Namaste England Set For Dussehera 2018 Release : Ishaqzaade Parineeti Chopra and Arjun Kapoor Will Make You Fall In Love Again With This Poster!

The shoot for the film got delayed often due to excessive fog and bad light in UP. While the crew used to arrive on time, they had to wait for the weather to clear up regularly for five days straight. The crew used to spend this time playing cricket or just simply singing songs or something.

While shooting the iconic running sequence in Barabanki, Arjun Kapoor suffered a spasm in his hamstring muscle. Although it was quite painful for him, he finished the shot after resting for just five minutes.

It was a joke on set that director Habib Faisal had a favourite actor on the set. Pradeep, who essayed the role of Banwra, an accompanist in Chand Baby's entourage, was very dear to the director.  Arjun would jokingly act very upset about this.

Last year, Arjun had shared pictures of the script of the film along with some scribbled notes from 8 years ago while expressing gratitude to the film's cast and crew on the special occasion. Parineeti Chopra had shared the pictures of her national award.

(The above story first appeared on LatestLY on May 11, 2021 12:42 PM IST. For more news and updates on politics, world, sports, entertainment and lifestyle, log on to our website latestly.com).