Laal Singh Chaddha is the upcoming Hindi film starring Aamir Khan and Kareena Kapoor Khan in the lead. It is the remake of the Hollywood classic Forrest Gump that featured Tom Hanks in the titular role. 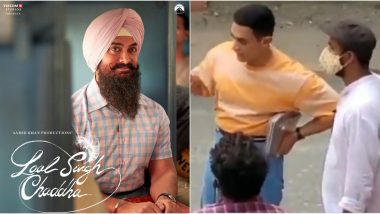 Laal Singh Chaddha is the upcoming Hindi film starring Aamir Khan and Kareena Kapoor Khan in the lead. It is the remake of the Hollywood classic Forrest Gump that featured Tom Hanks in the titular role. When the makers released the first look of Aamir, we saw him sporting a curled up moustache and a long bearded avatar, wearing a turban and was all smiles. Right now a video of him is rounds on the internet in which we can see a younger version of the actor and fans are pretty amazed. Laal Singh Chaddha: Aamir Khan Will Start Shooting in Mumbai With Extra Safety Measures for Pregnant Kareena Kapoor Khan.

Aamir Khan is always known to experiment with his looks. Be it gaining weight or shedding a few kilos or going for a major makeover, the perfectionist of Bollywood never hesitates. In this video that is going viral, shared on fan pages, Aamir can be seen sporting a casual avatar, sporting a well-trimmed hair and a clean shaven look. The actor is seen having some discussion with the crew members. Laal Singh Chaddha: Aamir Khan Gets Mobbed By Fans In Turkey Who Broke Social Distancing Norms To Click Pictures With the Actor.

Aamir Khan On The Sets Of Laal Singh Chaddha

The comments posted by some fans read, “he looks so young”, “who can say he is 55”, and so on. This video that is going viral from the sets of the film was a scene that is been filmed in Delhi. Talking about the release of the film, Laal Singh Chaddha was scheduled to hit the theatres during the time of Christmas this year. Owing to coronavirus pandemic, it has now been pushed to December 2021.

(The above story first appeared on LatestLY on Sep 27, 2020 12:10 PM IST. For more news and updates on politics, world, sports, entertainment and lifestyle, log on to our website latestly.com).