Remember Pal? The indi-pop sensation of the bygone era which left everyone mesmerised? Yup, that's where we spotted Abhay Deol. Check it out yourself...we aren't helping you find him in the video 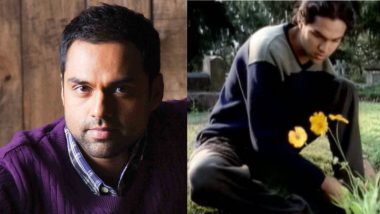 Abhay Deol is unlike any other Deols in the film industry. That's a fact which has been established long back. He isn't a Deol who yells at the camera to prove his point or who flexes his muscles or be just dashing. Abhay did the unthinkable. He took all three attributes from the above and added a generous amount of acting to it. Voila! Thanks to that, we have class actor amongst us. He likes to be an actor of quality than of quantity and that sets him apart from not from the Deols but from the half of the industry. But even the well-placed industry kids have humble beginnings. Abhay was first spotted on screen in music video of the sing KK. Abhay Deol: I Realised with Time About Privileges I Have Because of My Film Family.

Remember "Pal"? The indi-pop sensation of the bygone era which left everyone mesmerised? Yup, that's where we spotted this dimpled Deol. Check it out yourself. We aren't telling where exactly in the video will you find him. Let's see if you can spot Abhay Deol here. Abhay Deol Birthday Special: From Zindagi Na Milegi Dobara to Socha Na Tha, 5 Popular Roles of the Actor You Should Not Miss!.

Abhay Deol was recently seen in 1962: The War In Hills and will be next seen in a movie named Idhu Vedhalam Sollum Kadhai .

(The above story first appeared on LatestLY on Mar 15, 2022 08:40 AM IST. For more news and updates on politics, world, sports, entertainment and lifestyle, log on to our website latestly.com).