Aishwarya Rai Bachchan celebrates her birthday today. This year she has battled COVID-19 along with her daughter, husband and father-in-law. So we wish her good health in plenty this year and to celebrate her day, here're some of her best moments from her movies 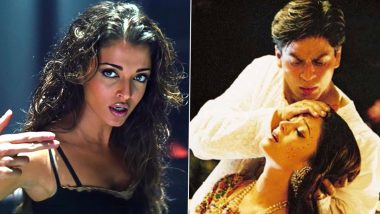 It's her birthday! Yes, today is Aishwarya Rai Bachchan's birthday. She has often been appreciated, awarded and rewarded for her spotless beauty but there's more to this woman than that pretty face. Over the years, she has proved that she can play any kind of role as long as they are challenging. She never hesitated to age on screen which is seen as a cardinal scene by the industry. Be it Action Replay or Guru or Sarabjit, Aishwarya has always done what the role demanded. Today she has made her presence on the screen fairly scarce but we are sure if presented with a good role, she will set the screens on fire. Aishwarya Rai Bachchan’s Throwback Mouthwash Ad Is Pure ’90s Cheese (Watch Video)

On that note, we thought why not walk down memory lane and check out a few moments of Aishwarya from her movies which are simply majestic. So here they are...

This is one of the most stylish movies Bollywood has ever produced with two of the most good-looking people as the leads - Hrithik Roshan and Aishwarya Rai. 'Are you like checking me out?' is one of the phrases that refuses to leave your head after watching the film and all because of the way Aishwarya says it. Can you blame Hrithik for looking so perplexed?

Devdas Mukherjee is not a hero but a loser. Putting him in his right place, Aishwarya excelled in this scene where she shuts him down like a boss! And the place where she says she has Gunas as well beauty is a winner! It's not surprising that a man's ego was hurt and he hit her. Told you, he is a loser!

Aishwarya is a Rajput Princess here but she isn't just a commodity that was handed over to the Mughals as a peace treaty but a warrior too. The fight sequence between Hrithik and her gives us such a high. She is relentless that she will not forgive him for not trusting her and we so love that strength!

This is one of the decisive moments in the film and it was beautifully portrayed by Aishwarya. Her way of showing her mother how much she loves Salman in the film will make you choke.

It's always exciting to play grey roles but how many can do a spectacular job of that and look million dollars all the time? Aishwarya Rai Bachchan! This scene from Pink Panther 2 is proof.

We know many of you wouldn't agree with this list or would want to add more. That's exactly what the comments section is all about. Do let us know which one is your favourite from the above or if there's any other scene of Aishwarya Rai Bachchan that you love.

(The above story first appeared on LatestLY on Nov 01, 2020 12:00 AM IST. For more news and updates on politics, world, sports, entertainment and lifestyle, log on to our website latestly.com).