Akshay Kumar’s Collaboration With Rohit Shetty Is All Fire, LITERALLY! 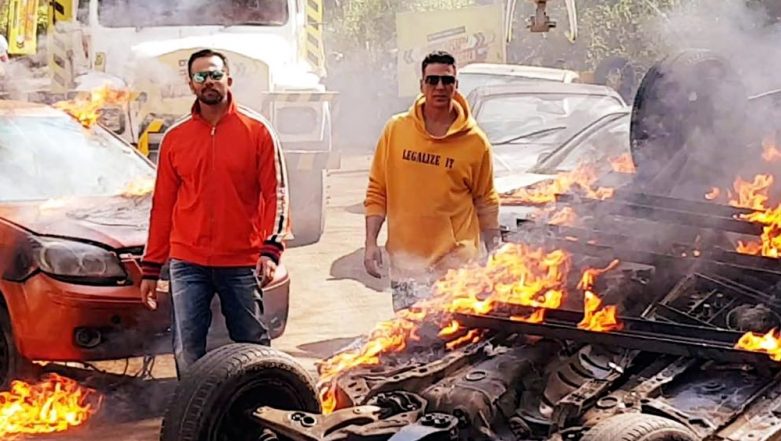 Seems like Bollywood Khiladi Akshay Kumar has taken ‘setting the stage on fire’ way too seriously and apparently forgotten his wife Twinkle Khanna ’s warning. The actor has collaborated with Rohit Shetty for Sooryavanshi, while the promotions of his upcoming film Kesari are in the air. Adding a cherry on the top, the actor is also warming up with Rohit for the television show Khatron Ke Khiladi. Well, Akshay, you seem to have your kitty packed with back-to-back work commitments. To declare his collaboration with Rohit, the Entertainment actor took to his Instagram handle to share their picture amid the flaming sets. Akshay Kumar Breaks Stereotypes, Joins Female Bikers In Lucknow to Create Awareness About Menstrual Taboos - View Pic!

Akshay captioned the macho picture as, “It's a Flaming Week for #Kesari 🔥 Warming up with @itsrohitshetty for Khatron Ke Khiladi. Watch this space!!” The actor also added a postscript note, pleading the fans not to tell his wife Twinkle Khanna about the stunt. “P.S. Don’t tell my Wife 😜,” wrote the actor.

It's a Flaming Week for #Kesari 🔥 Warming up with @itsrohitshetty for Khatron Ke Khiladi. Watch this space!! P.S. Don’t tell my Wife 😜

Akshay will be seen for the first time on a digital platform with an Amazon Prime Original series which has been tentatively titled The End. The series is expected to be a blend of action, drama, and thriller. The End: All You Need To Know About Akshay Kumar's Upcoming Amazon Prime Series.

On the Bollywood work front, Akshay Kumar is all set for the release of his next, Kesari which is all set to release on March 21. The film also stars Parineeti Chopra along with him. The actor will then share the screen space in Rohit Shetty directorial Sooryavanshi, which will be releasing on Eid 2020. The makers shared new posters of the Akshay Kumar starrer announcing the release date of the film. A khakee-clad Akki is ready to take on the criminals and how! "A bullet for a bullet" read the movie poster.