Bollywood music composer, Amaal Mallik celebrates his birthday today (June 16) and so here we list some of his great works until now. Listen, watch and enjoy!! 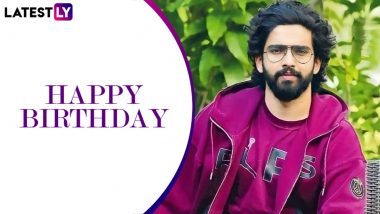 Music composer Amaal Mallik celebrates his birthday today (June 16). The super versatile lad debuted in the industry in 2014 by composing three melodies for Salman Khan’s Jai Ho and since then has been churning hits after hits. Brother of singer Armaan Malik, Amaal started to learn music at the age of eight. In his career so far, he has composed songs for many A-listers from showbiz. Not only, he has managed to wow the Hindi film industry audience, but he is loved across the globe and also has a humungous fanbase. And so on the occasion of his born day, we list his hit compositions that are excellent. Amaal Malik Responds to a Troll Asking Him to Respect Seniors Like Anu Malik, Says 'Kaam Achha Hain Doesn’t Mean Aadmi Achha Hai' (Read Tweet).

This song was Amaal’s first-ever as music composer.  It’s a hard-hitting track and stars Salman Khan. Although quite old, it is still a fan favourite. It’s sung by Armaan Malik and Wajid Khan.

A recreated version of the 90s track, this soft song from Malik’s chartbusters will transport you into a different world altogether. The cherry on the cake is that it features Amaal's brother Armaan in the melody and it’s pleasant to watch.

This is a cool and crazy party track that can instantly pump anyone up. The song is from Kapoor & Sons and features Alia Bhatt and Sidharth Malhotra. A fun groovy track composed by the one and only.

Starring Ranbir Kapoor and Jacqueline Fernandez, this amazing melody is composed by Amaal. It has electronic dance music beats to it and can be called as one of the biggest hits of his career. A superb creation indeed!

Last on our list is Jab Tak, which is from the film M.S Dhoni: The Untold Story. This one is a romantic track that is sung by Armaan and composed by Amaal Malik. A simple yet beautiful tune.

That’s it, guys! These are some of the greatest hits from Amaal Malik’s filmy career until now. Yes, we know there are many other songs that we could have been added to the list, but these are our fave top five. Happy birthday Amaal!

(The above story first appeared on LatestLY on Jun 16, 2021 01:34 PM IST. For more news and updates on politics, world, sports, entertainment and lifestyle, log on to our website latestly.com).