Sonam Kapoor and Anand Ahuja have given us major #couplegoals anyway and they're back again to do the same! 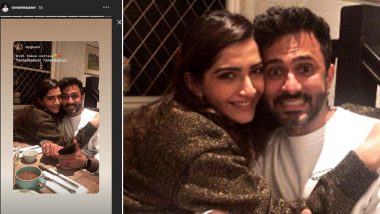 Anand and Sonam spend the evening together (Photo Credits: Instagram)

Sonam Kapoor and Anand Ahuja have given us major #couplegoals anyway and they're back again to do the same! Sonam and Anand are our personal favourites simply because of who they are when they're together and when they're apart too! They've both helped each other be better people and that's what we'd all want from our partners, no? Remember how during Valentine's Day Sonam Kapoor posted about how badly she was missing Anand? Well, the lovers are now reunited! The lovebirds went out with a couple of friends last night and this pic from their outing is all things cute. Sonam is seen hugging Anand while he flashes a big smile as their friend and popular stylist Tanya Ghavri clicks them. Sonam Kapoor and Anand Ahuja Begin Their Weekend on a Peaceful and Divine Note - See Pic

The couple dated for almost three years before they tied the knot in May last year. Their wedding was one of the most talked about ones in 2018. Post that, Sonam and Anand have been happily married! Let's Take a Moment to Appreciate Sonam Kapoor's Husband Anand Ahuja For Being Such a Sweetheart to the Paparazzi.

Check out their latest pic from Instagram right below: 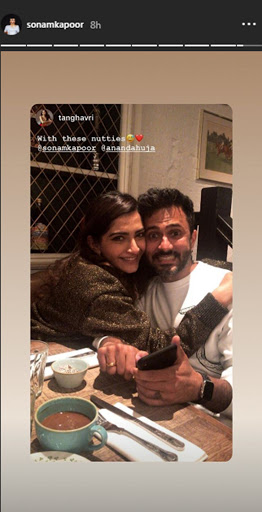 And after seeing them together for so long, with all the love and respect they have for each other, all we wish for is our own Prince Charming to be like Anand. and if you are someone who have always been anti- love, their love story will reinstill your faith in love.

On the work front, Sonam is next going to be seen in Zoya Factor, for which, she has already started shooting. As for their latest photos are concerned, we want to see more of them! How about you?

(The above story first appeared on LatestLY on Feb 19, 2019 08:52 AM IST. For more news and updates on politics, world, sports, entertainment and lifestyle, log on to our website latestly.com).